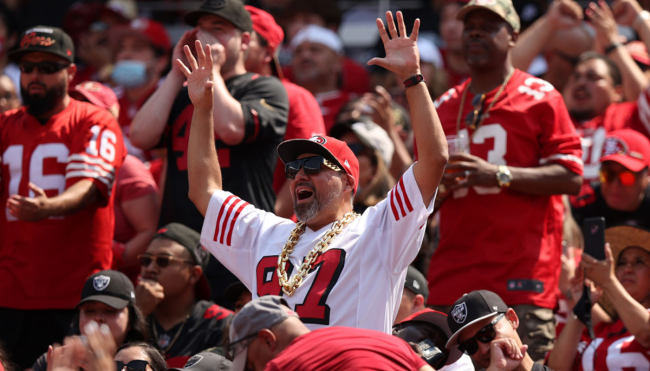 A lot of sports fans who attend a game in person put in a fair amount of work to increase their chances of getting the three seconds of fame that come with appearing on television, ranging from kids who appeal to the pathos of the broadcast crew with signs emblazoned with shameless pleas to the grown men who devote more time perfecting their facepaint in the mirror than their wife spends doing her makeup before a night out.

However, there are certain scenarios where the last thing you want is to have your likeness beamed out to the masses, like when your high school principal is scouring the streets of Chicago while trying to track you down for playing hooky.

That’s also a fate you want to avoid when you lie to your boss about being sick in order to skip work and attend a sporting event, which is exactly what one 49ers fan did over the weekend when he played the classic “not feeling well” card in order to watch San Francisco’s preseason contest against the Raiders on Sunday.

Unfortunately, as he revealed in the text exchange he posted on TikTok, his master plan fell apart when his boss caught his “ugly ass in 4K” after a cameraman turned his lens on the fan in the second quarter.

TRIGGER WARNING: THE VIDEO FEATURES THAT DUMB “OH NO” SONG

Network did me dirty 🤦🏽‍♂️ caught in 4K #caughtin4k #FYP