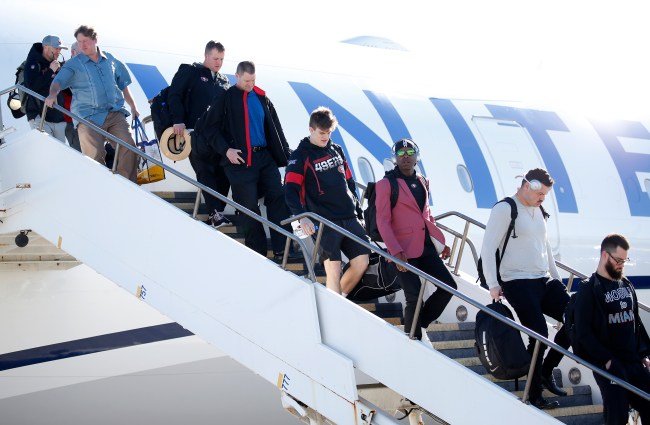 The 49ers finally made it back home after their brutal Super Bowl loss to the Chiefs but unfortunately it doesn’t seem like many fans were there to greet them at the airport.

According to several reports and videos only about a handful of fans showed up to the airport to support the Niners in their return.

The buses carrying the San Francisco 49ers wound their way through the streets of Santa Clara Monday, a quiet homecoming for the team after their disheartening 31-20 loss to the Kansas City Chiefs in Super Bowl LIV.

Only a handful of fans stood outside the chain link fence at Mineta San Jose International Airport as the players streamed out of their charter flight. Among them was Stella Masi.

“We are super proud of them — win or lose we are still proud of the Niners,” she told KPIX 5. “For now, I don’t want to talk about next year. Right now I want to just focus on seeing them and welcoming them back home.”

Masi said she believed it was important for the team to see at least a few welcoming faces.

“I believe it’s very important for them to see — win or loss — if you are a 49ers fan you should still be proud of them because it was a great game in the beginning and all the way to the end. Support has to always be there for them,” the Palo Alto resident said.

The Internet mocked Niners fans for not coming out to support the team after their Super Bowl loss.

Can’t stop laughing at the amount of fans who showed up at the airport to greet the 49ers after the Super Bowl pic.twitter.com/Y1oYCeZ1Gj

The Niners Band Wagon must of broken down on their way to the airport. https://t.co/4TmPZfnZSH

Dang, only 5 faithful showed up at the airport to wait for the niners? Lmaoo oh shit 😂😂😂

After the @49ers lost the #superbowl a large group of fans supported them when they arrived at the airport. Ummmm…..#49ers #lost #49ersfaithful pic.twitter.com/2Kiskog39J