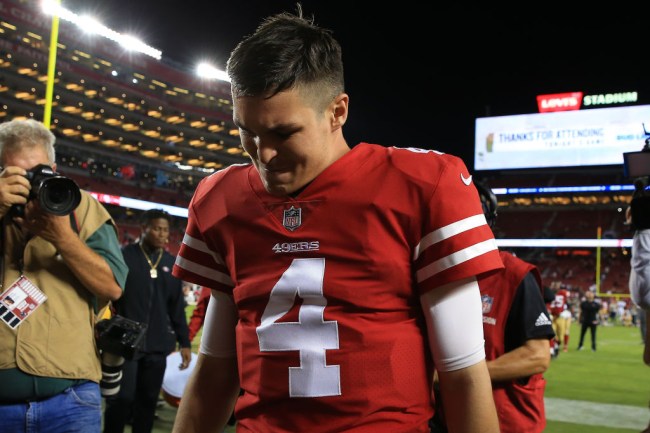 I was reduced to watching a Thursday Night Football game that featured two of the worst teams in the league and I continuously asked myself three questions as the Raiders made the Niners look like the 2007 Patriots.

The 23-year-old who shattered Brett Favre’s passing records at Southern Miss made his first career start Thursday night and he’ll remember it for the rest of his life. Mullens completed 16 of 22 passes for 262 yards and three touchdowns in the 49ers 34-3 drubbing of Oakland.

Do not adjust your sets: Nick Mullens now has as many TD passes as the entire Buffalo Bills team in 2018.

Nick Mullens threw 3 TDs in his NFL debut, leading the 49ers to a season-high 34 points in 34-3 victory over Raiders. He became the first player in 49ers history to throw 3 TDs in his debut

His 151.9 passer rating is the highest by any player in his NFL debut since 1970 merger.

Have a game, buddy.

After the game, Mullens, who seems like a salt-of-the-earth dude, got emotional in his first-ever post-game interview in the NFL. Check it out below, you may need to open the video in a new tab because the NFL Network just wants to watch the world burn.

Throughout the interview, Mullens continuously repeated the phrase “I love football.” That dude just had the greatest day of his life in the most high-pressure situation of his life. Isn’t that what makes being a sports fan incredible?

.@NickMullens is HYPED after his first career win.