These 5 Athletes Are Sh*ttier Tippers Than Matt Kuchar, The PGA Tour Winner Who Stiffed His Caddie 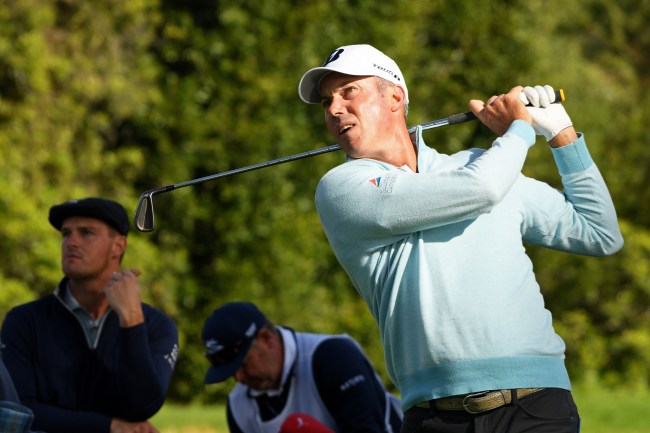 Nine-time PGA Tour winner Matt Kuchar has been getting nailed to the cross this week for giving his fill-in caddie $5,000 of his winner’s check of $1,296,000 at the Mayakoba Classic last November. Although there is no set fee local caddies charge to carry the bag for a pro and Kuchar had said the two agreed on a payment structure prior, bonus payments are usually anywhere between five and 10 percent of the winning purse.

Kuchar paid his caddie .38% of his winnings.

Five grand for a weekend’s work is nothing to scoff at, especially when you consider that Kuchar ranks low in the ‘Awful Athlete Tippers’ list.

Here are five that bro them out of the water.

In March of 2015, then Philadelphia Eagles running back LeSean McCoy left a 20 cent tip at PYT burger joint in Philadelphia as a “statement” for what he claimed to be awful service. The restaurant exposed the bad tip on its social media page, creating a viral story that resulted in Charlie Sheen of all people offering to pay the waitress $1,000 for the troubles McCoy caused.

Pippen earned the nickname “No Tippin’ Pippen” during his time in Chicago. And, in 2005, Pippen was caught trying to negotiate down some strippers from their ususal fees at the Penthouse Executive Club. Pippen, who once signed a $67 million contract, once left $25 on an $800 tab. Charles Barkley once said, “There’s nobody cheaper than Scottie Pippen and Michael Jordan.”

In Andre Agassi’s 2009 memoir titled Open, the tennis legend didn’t mince words about his former competitor, Pete Sampras. Agassi said that he envies Pete’s “dullness” and wish he could emulate his “spectacular lack of inspiration.” He also said that Sampras once tipped a valet one dollar to fetch his car.

Things came to a head in front of thousands of people when the two were mic’d up for a charity event and Agassi re-hatched Sampras’ bad tipping after Sampras did a light-hearted impression of Agassi’s pigeon-toed walk. It ended with Sampras trying to drill Agassi with a serve. Highly entertaining.

2015’s NFL rushing touchdown king DeAngelo Williams left a 75 CENT tip on a $129 bill, or a .0058% tip, for him and five of his friends. The waitress exposed him on social media and he responded with his reasoning:

I tried to leave nothing at all I couldn't find change😏 I was pissed I left 75cent! https://t.co/VOlBpnENab

So it takes 1.5 hours for u to get me 3 salads and pasta and it's not packed at all and slow by her standards https://t.co/zQL7tQRrIP

I ordered chicken and shrimp in my pasta they put it on my salad they took it back and removed it from salad and put https://t.co/gIrDkMXEKj

It in my pasta leaving a shrimp tail in the salad lol https://t.co/gIrDkMXEKj

I'm glad you tried to blast me on here because I give u truth and what about the refills I even asked for a manager https://t.co/p7O0EoA8Ql

She never asked for refills and took a dish back removed what was on it and left a shrimp tail in my salad https://t.co/rCqpGGdxmv

Warren Sapp went to a sports bar to watch the U.S. soccer team play its World Cup match in 2014 and left the waitress a goose egg for a team. The message on the receipt reads “Boys Don’t Tip,” which Sapp would later reveal was alluding to the waitress constantly calling his crew “boys.” He then defended himself by saying it was “horrible” and the service was the “worst.”