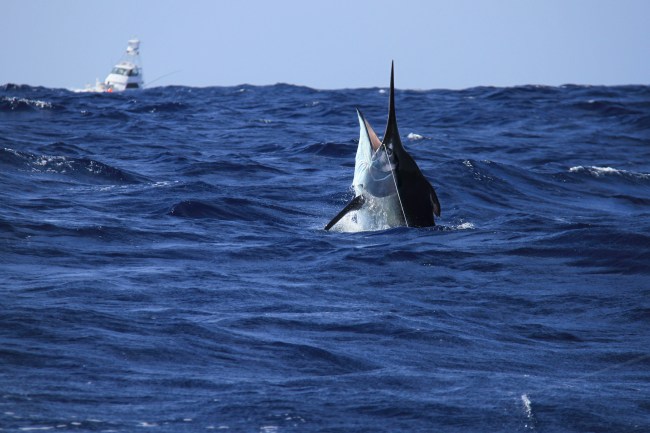 I try and say this as often as possible but everyone reading this should listen up: go to Panama. It is home to the best fishing on the planet. The Tropic Star Lodge in Piñas Bay is home to more fishing world records than any other place on the planet.

And all throughout the Pacific coast of Panama, you can have year-round chances to catch trophy blue and black marlin, yellowfin tuna, roosterfish, sailfish, and all sorts of other highly sought after gamefish. Years ago, I studied abroad in Panama and fell in love with the country so much I doubled my stay and I’ve since gone back to visit again. It’s such a gorgeous country and the fishing is legitimately the best around.

Now that my Tourism Panama pitch is over let’s talk about kayak fisherman Adam Fisk’s badass black marlin catch. One of the crazy things about Panama’s landscape are the abrupt mountains that seem to shoot straight off of the beach and into the clouds. The same thing happens underneath the water. It gets DEEP in a hurry and this means you can fish for billfish and pelagic species within sight of the beach in various parts of the country.

Adam Fisk hooked into an estimated 500-pound Black Marlin which is now the ‘unofficial’ world record for the largest black marlin caught from a kayak. What’s wild is it came just one year after he landed a 450-pounder while fishing the same spot out in front of the Los Buzos Resort.

In billfishing, a ‘catch’ counts when you get a hand on the leader. You don’t need to bring the billfish into the boat and string it up on the dock for it to count. This is a way to preserve the health of the fisheries. According to David Strege at For The Win, it was 4-hours-37-minutes into the fight before Fisk got his hand on the 15-foot leader and registered an official catch. By that time the 500-pound fish had pulled him 15 MILES away from where he started.

It was after he registered the official ‘catch’ by touching the leader that he made the executive decision to transfer the rod to a boat so he could save the fish’s life. Marlin will often fight so hard that their hearts give out. To prevent this, you try and catch and release them as quickly as possible.

“We decided to transfer the rod to the boat to save the marlin’s life,” Field explained to USA Today/For The Win Outdoors. “Marlin are notorious for fighting so hard and for so long that they die of exhaustion. It’s quite common, even when the angler intends to release the fish unharmed.

“From a kayak, Adam simply could not physically put enough pressure on the marlin to shorten the fight, and we knew if he continued from the kayak, the fight would drag on for hours longer and the fish’s chance of survival would plummet. We didn’t anticipate it taking me another 90 minutes in the boat to bring her up.”

The entire battle lasted 6 hours, 12 minutes before the marlin was close enough to the panga to cut it loose. (via For The Win)

What’s really cool about this Robert Field who has a large kayak fishing channel on YouTube was on hand to capture some outrageous footage of this fight that dragged Fisk 15-miles out into the Pacific. The clip is fairly lengthy so feel free to click around to the good parts:

I’ve never caught a Black Marlin before (only Blue) nor have I ever landed a billfish from a kayak so I’m supremely jealous all-around at this impressive feat.

To read more about this unofficial record-setting catch, you can click here to head on over to For The Win.