This 7-Year-Old Sprinting Phenom, Being Called The Next Usain Bolt, Is Faster Than All Of Us 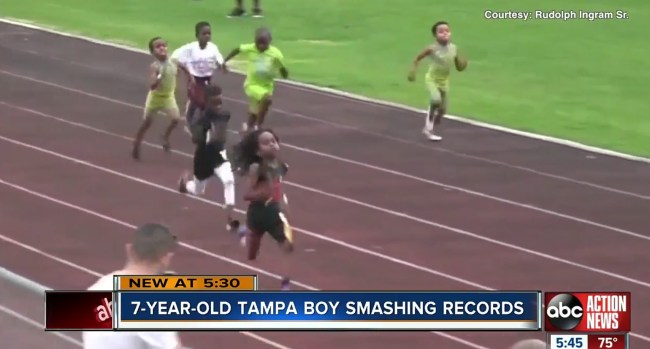 When one of your fans is future NBA Hall of Famer LeBron James, then you know you’re doing something right. Especially when you are just 7-years-old like Rudolph “Blaze” Ingram, Jr.

Ingram first came to James’ and the rest of the internet’s attention last year when video of him blowing past defenders in his pee-wee football league went viral.

Now he’s making news again with his outlandish speed by setting records that have people comparing him to the GOAT of sprinting Usain Bolt.

“I can give him all the tools to be great, but his drive and work ethic and competitive mentality, it sets the bar so much higher,” his dad, Rudolph Ingram, Sr. told WFTS-ABC. “I have seen him lose mid race and just take off and get faster. He does not like to feel like a loser. He wants to win.”

“Blaze” says his ultimate goal is to play in the NFL, but he hasn’t picked a team he wants to play for yet.

Honestly, I’m just surprised Nick Saban hasn’t already offered him a scholarship. Eh, give him a couple more years and I’m sure that he will.