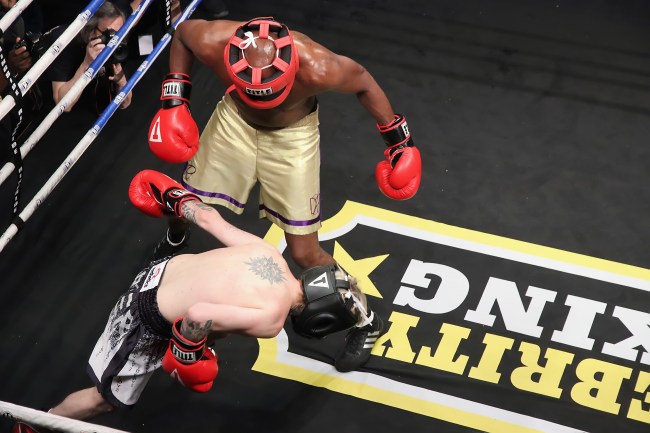 Aaron Carter got beat down so badly by former NBA player Lamar Odom that he may have suffered a concussion during the fight.

On Friday night, Odom, who had a 10-inch size advantage in the fight, pummeled Carter for two rounds.

Lamar Odom with the first round knockdown of Aaron Carter pic.twitter.com/Ulh6A1ShW2

Lamar Odom wins against Aaron Carter with a second round KO pic.twitter.com/0o3FcJmPX7

After the fight Carter admitted he had a “mild concussion” in an Instagram post but that he still enjoyed himself during the fight.

“Mild concussion but fuck it, it was worth it! Thank you (Celebrity Boxing) and Lamar Odom for such an amazing fight I appreciate you giving me your best! Thank you!”

Let me guess #aaroncarter I predict you will have “brain cancer” from this fight? 🙄 pic.twitter.com/grVCD2f4Yn

You win some, you lose some. But you live. You live to fight another day 😜 pic.twitter.com/VhstlJozky

I got punched in the throat so hard lol that shit was so much fun!!!! I actually had a blast so y’all can say what you want. But I don’t see you at 6’ fighting a giant. Takes a bow*

I did my best. Fought like a lion. He was huge. And at least I didn’t go in their like a pussy 😊 pic.twitter.com/21jICJJ7Gt