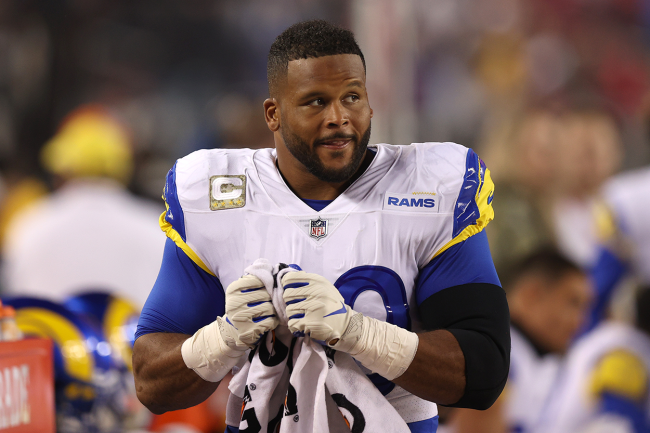 Aaron Donald may or may not return to the Los Angeles Rams this fall. He wants to, but it was not originally in his plans and he wants to get paid first.

And now he is turning up the heat on his team to get a deal done.

News of Donald’s possible retirement first broke during the pregame of Super Bowl LVI. It was followed by a win over the Bengals and head coach Sean McVay said with certainty that his star defensive tackle would be back.

Since then, Donald has made conflicting comments about whether he would be returning to the Rams. He has hinted at retirement, but he has also hinted at coming back.

Meanwhile, Andrew Whitworth made a definitive statement about his former teammate’s future and reports have said that he will play for the right price. Donald essentially confirmed those reports in a recent appearance on the ‘I Am Athlete’ podcast.

Aaron Donald spoke about his desire to return to the Rams and explained how retirement is still very much in play if the business side of things doesn’t get worked out.

“It ain’t about the money, but it’s a business at the end of the day,” Donald said. “That’s what you’ve got to see. For me, it’s about winning. I don’t want to play football if I can’t win anyway, so I feel like if I got a real opportunity to win another Super Bowl, then it makes sense to play. But again, it’s still a business. We’ve got to handle the business side of things, and if that wasn’t to get handled then, you know, it is what it is type of situation. I’ll be fine regardless.”

In addition, Donald shared how it was always his plan to play only eight seasons in the NFL. That was not contingent on the Super Bowl.

“But me talking about retirement, that was happening way before we won a Super Bowl,” he said. “I’ve been saying that since I got into the league that I was going to play eight years and be done. That’s just what I’ve been saying. It just came out and then everybody thinks that, ‘Oh, he said if he wins a Super Bowl he’s going to retire.’

“Nah, I got teammates, coaches, my family who know about this. I said I’m going to play eight years, and I’m going to probably be done playing football.”

However, beating the Bengals did help to reignite some of Aaron Donald’s fire and desire to get back on the field this fall.

“Winning a Super Bowl, you get kind of a little addicted to it,” said Donald. “I ain’t going to lie. I want to feel that again. That experience is like none other. If I was to play, it’s just to win another Super Bowl, but at the end of the day, it’s still a business and it got to make sense to me and my family.”

The ball appears to be firmly in Los Angeles’ court. If they want to pay Donald the number he wants, it sounds like he would come back. If not, then Donald appears content with riding off into the sunset.