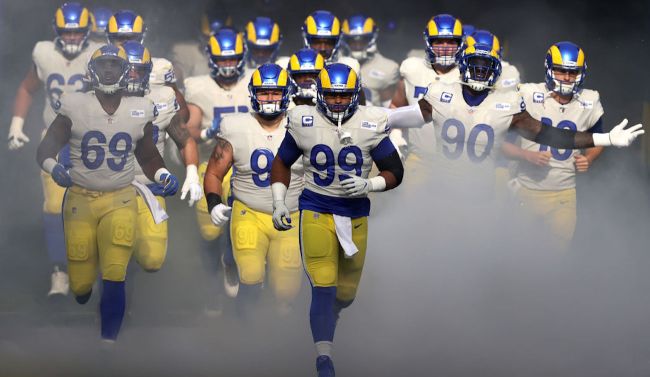 If the Los Angeles Rams intend to run it back as championship contenders next season, bringing back future Hall of Fame defensive tackle Aaron Donald is certainly at the top of their priority list, as the 30-year-old game-changer is reportedly mulling retirement following LA’s Super Bowl LVI victory.

Rodney Harrison just said on NBC's pregame show that Aaron Donald told him there's a strong possibility he could retire if the #Rams win the Super Bowl. Video is below: pic.twitter.com/tIhAzQCwWv

While Donald has yet to make an official announcement regarding his future, Andrew Whitworth — his Rams teammate who *actually* decided to retire following their Super Bowl win — is convinced that Donald will be back on the field wreaking havoc for the NFC West club next season.

“He’ll be back on that field dominating again,” Whitworth told TMZ Sports. “Dominate on the football field again,” Whitworth said. “That’s what I know he knows how to do well and I’m sure he’s going to be doing it again.”

The Rams certainly seem serious about repeating as Super Bowl champs as they recently signed wide receiver Allen Robinson to a three-year, $46 million deal. They did, however, lose pass rusher Von Miller, as the 32-year-old signed a six-year, $120 million deal with the Buffalo Bills. Odell Beckham Jr. — who helped lead the Rams to the Super Bowl prior to suffering from a torn ACL in the big game — also remains a free agent.

RELATED: Aaron Donald Reveals What Joe Burrow Said To Him That ‘Woke Him Up’ During The Super Bowl