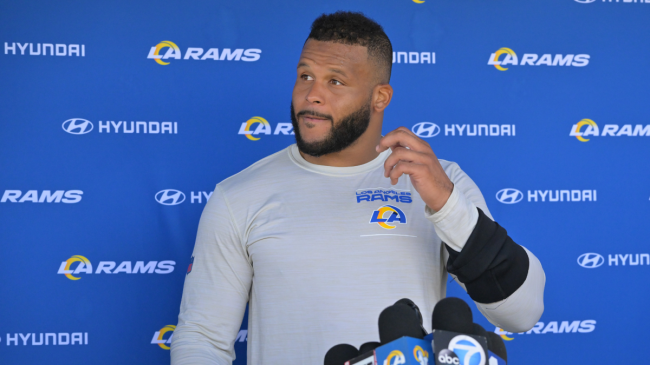 There is more news surrounding the retirement rumors that involved Rams defensive star Aaron Donald this past offseason. After winning a Super Bowl in Los Angeles last February, the lineman contemplated hanging up the cleats for good and ending his career on a high note.

“How serious was star Aaron Donald about retiring? A letter from Donald informing the team of his plans to walk away was sent to the Rams. It was never turned in to the NFL.”

Rapoport states that Donald and his agent sent the Rams a letter noting his retirement “effective on May 9.” While the papers safely made it to the Los Angeles front office, they never wound up in commissioner Roger Goodell’s hands.

And maybe that was the point.

After reading more on the situation in a story posted by Rapoport on NFL.com, the retirement paperwork seemed to have a major influence on the pending contract negotiations that were occurring between Donald and the Rams.

“Donald had informed the Rams he was retiring effective on May 9. [The letter] came with instructions to send it in to the league office.

“But the letter was never sent to the NFL. What transpired next paved the way for a massive contract adjustment for Donald to commit to the Super Bowl champs for another two years… In May, contract talks for Donald, who was about to turn 31 and had three years left on his original six-year, $136 million extension, had stalled.

“The letter was sent to the Rams… Rams brass, Donald and his agent had a zoom set up the next day to discuss his contract.”

One key component of this retirement was the timing of it all. Had Donald retired in May, it would’ve triggered a $21.5M salary cap hit. AKA leverage. When all was said and done, he walked out of the building with a $40M pay raise.

Many fans agree that the retirement letter was sent as a way for Donald to earn more money.

Even Rapoport questions whether the retirement letter was “strategic or real,” and after reading the story, fans aren’t buying it. Check out the immediate social media reaction.

One fans says, “He was never gonna retire.”

He was never gonna retire https://t.co/FXFPRosrdi

Another said, “I really only interpret this one way, Aaron Donald wanted his money no matter what and the letter was a negotiating tactic using the only leverage he has. ”

I really only interpret this one way, Aaron Donald wanted his money no matter what and the letter was a negotiating tactic using the only leverage he has. #Rams

This NFL follower wrote, “I’m still fairly confident this was just a ploy from his agent.”

I’m still fairly confident this was just a ploy from his agent. https://t.co/oUzrf4L6KD

If so, it definitely worked out in Donald’s favor.