Aaron Donald Says He Is Definitely Coming Back, If The Rams Bring Back Two Other Players 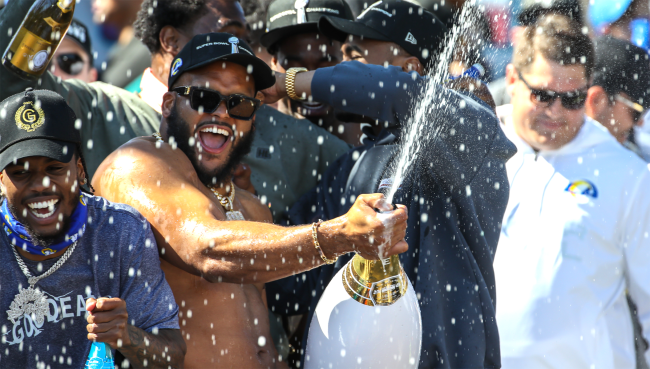 Los Angeles Rams defensive lineman Aaron Donald is only 30-years-old, but he’s already pretty much done everything a football player at his position could ever want to do.

He was a first round draft pick. He is an eight time Pro Bowler. He has won a record three Defensive Player of the Year Awards. And now he is a Super Bowl champion.

What else does he have to prove on the football field?

Then again, should Aaron Donald retire, as he strongly hinted he might do prior to winning the Super Bowl, he would be walking away from the $52.5 million dollars left on his contract. (Not that he needs it. He has already earned almost $100 million in salary in his career.)

On Wednesday, at the Rams Super Bowl victory celebration, Aaron Donald’s teammate Von Miller said both he and Donald will be back with the Rams in 2022.

“We’re gonna run that s–t back like Shaq and Kobe,” Miller told TMZ.

TMZ also caught up with the man himself and asked him point blank if he is coming back for one more run.

At the celebration, Rams head coach Sean McVay started a chant of “Run it back!” which in itself was interesting since he was also non-committal about returning next season.

The chant, basically directed at Aaron Donald, who was at the podium at the time, led to the future Hall of Famer telling the crowd, “We built a super team. We can bring a super team back. We can run it back.”

Sean McVay and Aaron Donald are ready to repeat 🔥

Unfortunately, Donald’s wish not guaranteed as Odell Beckham, Jr. is both a free agent as well as about to undergo a second ACL surgery in two years.

Von Miller is also now a free agent and is expected to explore options with not only the Rams, but other teams as well.

The @NFLGameDay Notebook with @MikeGarafolo and @TomPelissero: The #Rams and QB Matthew Stafford are expected to focus on an extension after the season; Jared Goff enters a prove-it year for the #Lions; #Rams star Von Miller is expected to fully explore free agency. pic.twitter.com/wLNcRTN1b2

Should both Donald and Miller depart, the Rams defense that was so stout in 2021 will certainly take a huge step back in productivity in 2022. It could also mean that the team will be starting over with a new head coach.