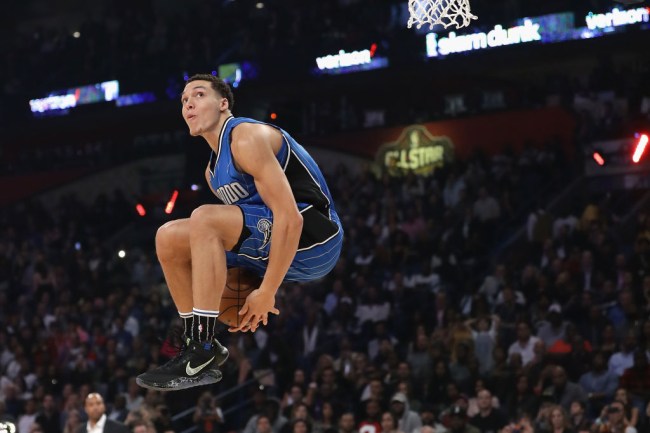 So the ‘breaking news’ update from ESPN early this week was that Aaron Gordon has released a diss track directed toward Dwyane Wade called ‘9 Out Of 10.’ This was a clear indication that Gordon is still not over the nine point rating Wade gave him in the final round of the NBA Dunk Contest, causing him to finish second. Before I even begin to comment on how cringe-worthy the ‘music video’ was, can we all agree that this may be the first sign that we have been quarantined for too long?

Could you imagine Yasiel Puig making a Madison Bumgarner diss track for striking him out on a called third strike that he thought was a ball in the All-Star Game? This is the only comparison or ‘what if’ scenario I can think of to try and wrap my head around this.

ESPN running this as their top story only shows me that unless it is a Monday following another episode of ‘The Last Dance‘ documentary, they have completely run out of things to talk about.

Gordon is shown in several rooms of his mansion laying down his diss track lyrics on Wade sipping on what looks to be Wade branded red wine. I can only imagine that Wade has seen this clip in multiple rooms of his mansion, and could absolutely care less.

This was supposed to be the time we were debating Giannis vs LeBron for league MVP. We were supposed to be gearing up for what looked to be a collision course to the Clippers going up against LeBron’s Lakers for the battle of Los Angeles bragging rights. It was supposed to be such a beautiful time in the NBA. Instead, I woke up this morning to Aaron Gordon in a bathrobe, shit-talking Dwyane Wade for a Dunk Contest score that only 10% of us actually watched live.