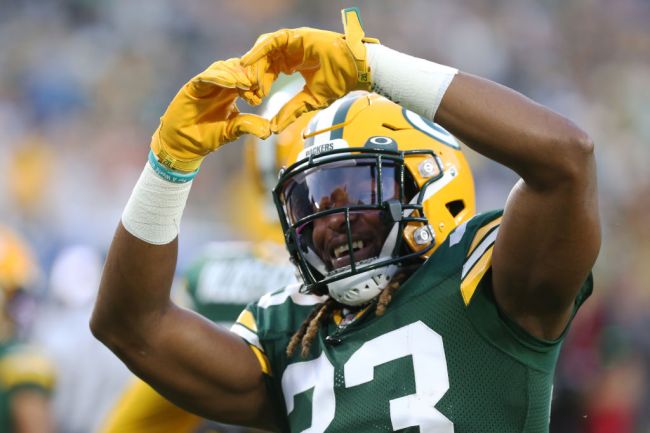 Aaron Jones had an absolutely dominant Monday night in Green Bay. The 26-year-old running back found the end zone four times in a 35-17 win over Detroit and had 115 total yards on just 23 touches.

However, during one of his four trips to pay dirt, he lost a chain he wears that contains his father’s ashes. Fortunately, Jones confirmed on Tuesday morning that the necklace had been found.

Alvin Jones Sr. tragically passed away during the offseason due to complications from COVID-19 at 57 years old.

Jones and his father were very close.

Alvin Sr. was Aaron’s “why” and retired from the military when his son was a senior in high school. He never missed a game.

Aaron Jones’ “Why” is as pure as it gets pic.twitter.com/jzm6lZAi1J

For Jones to lose a necklace of such significance could not have be easy. And yet, he remained in good spirits.

He spoke with ESPN’s Lisa Salters after the game and said that his dad would understand.

What a line. What a guy.

Aaron Jones is the most lovable player in Packers history pic.twitter.com/ytuSBYzEqp

Jones spoke with media after the game and reiterated that his dad would not be upset, but proud of him for scoring.

Aaron Jones in reference to losing the necklace with his dads ashes in it in the endzone. 🥺🥺 pic.twitter.com/2TmW7jqu2v

The Packers grounds crew worked tirelessly after the game to comb every inch of the end zone. And thank goodness, their search was successful.

Jones continues to be one of the most genuine, hardest working players in the league. For him to be so humble and gracious in what could have been a really devastating situation really speaks to his character.