Cristiano Ronaldo Looked Like He Scored His First Free-Kick Goal For Juventus, But Then Aaron Ramsey Savagely Stole It From Him 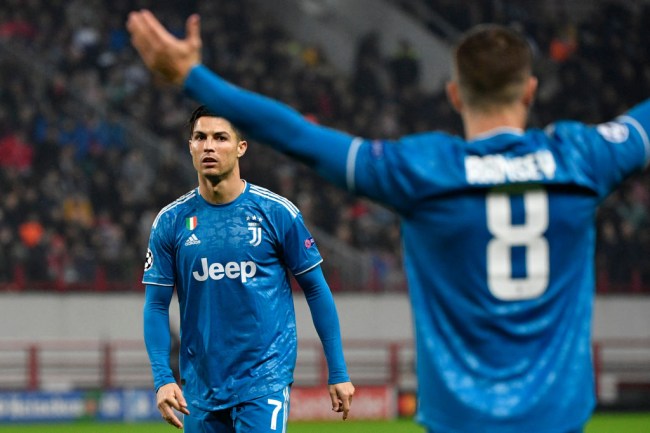 It would be tough to find someone that follows sports at all that has never seen a highlight of Cristiano Ronaldo scoring from a free-kick. While he’s certainly not the best free-kick goal scorer ever, he’s up there and has 46 free-kick goals scored for club on his resume.

That number is far lower for Juventus, in fact, he’s scored exactly zero free-kick goals since moving to the Italian club last year.

During Wednesday’s Champions League clash with Lokomotiv Moscow, Ronaldo got a chance to snap that cold spell in just the third minute. He struck a wonderful ball, but right at the goalkeeper. Lucky for Ronaldo, the keeper took it off his chest and the ball went through his legs. Unlucky for Ronaldo, as the ball was very clearly going to cross the line Aaron Ramsey flew in to tap the ball home.

At first glance, it looked like the ball trickled over the line before Ramsey gets there, but as it’s slowed down a bit Ramsey does indeed get there before the ball completely crosses the line.

This explains Ronaldo’s face in the featured image of the story. His team just took an early 1-0 lead, but he looks like he’s just seen a ghost while Ramsey is stood in the foreground celebrating; absolutely incredible stuff.

I’ll defend my guy Ramsey until the end of days as an Arsenal fan, but yikes, it’s a bold move from him to sneak in and take a sure thing goal away from Ronaldo. Any way to find the scoresheet, though, a goal is indeed a goal.

Juventus ended up winning the game 2-1 with Douglas Costa scoring the other goal for the club.