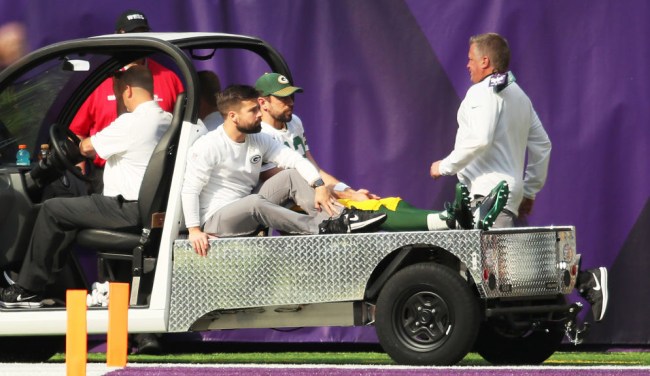 Aaron Rodgers, who now has a lot of free time on his hands courtesy Vikings linebacker Anthony Barr, visited Conan O’Brien for a little round of “Clueless Gamer.”

This episode’s game gives us all another sneak peek at the eagerly-anticipated Assassin’s Creed Origins.

When Conan asked Rodgers to describe the play in question he revealed that he now has a TON of screws in his collarbone.

“I rolled out to my right, I threw the ball and I got tackled and kind of slammed on the ground,” Rodgers told Conan. “But I’m good now — 13 screws later and here I am.”

Uh, 13 screws…that seems like a lot of screws, right? That many screws makes one wonder just how brittle his collarbone is going to be in the coming years. It’s not like defenders are going to stop slamming him to the ground when he comes back.

Oh well, at least try to enjoy the video game banter between Conan and your QB, Packers fans. And say a little prayer that I am wrong, while you’re at it.

The full segment with Rodgers will air on Thursday night.