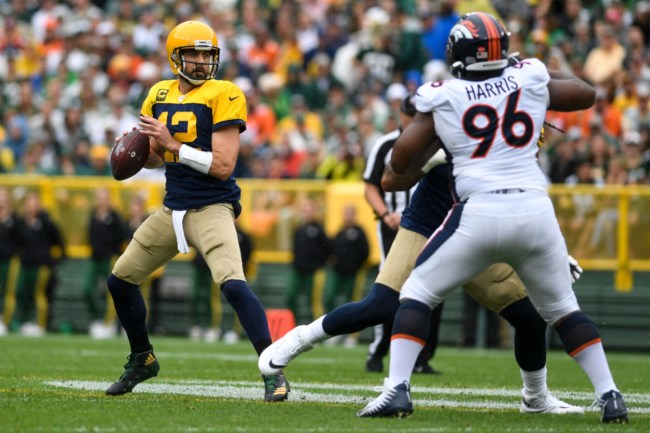 The Denver Broncos have been mentioned as one of the top landing spots for Aaron Rodgers if he elected to force himself out of Green Bay. The speculation of that situation actually unfolding got a major boost on Thursday with the Broncos hiring of Packers offensive coordinator Nathaniel Hackett as their next head coach.

Hackett has been the offensive coordinator in Green Bay each of the last three seasons and the consensus is that he and Rodgers have a strong relationship. Given the turmoil and uncertainties, Rodgers has faced in Green Bay, many assume that Rodgers could simply follow Hackett to Denver.

According to NFL Network’s Tom Pelissero, Hackett was set to interview for the Jaguars head coaching vacancy, but Denver finalized a deal before that happened.

The #Broncos are finalizing a deal with #Packers OC Nathaniel Hackett to make him their new head coach, per sources.

The Broncos narrowly missed out on the playoffs this season and look to be a team just a few pieces away from making a giant step in the right direction. Adding Hackett to the fold should help, and with cap space and weapons already in Denver, Rodgers could look at the situation there and say ‘sure, let’s do it.’

It’s worth noting that Rodgers is signed with the Packers thru next season, but could certainly force himself out of that situation one way or another. Rodgers did explain earlier this week that all options are on the table regarding his future meaning he could stay in Green Bay, retire, or move on from the only franchise he’s ever played for.

NFL fans on Twitter are totally convinced that Rodgers will decide to take his talents to Denver following the Hackett news:

The Broncos are doing everything in their power to get Rodgers hahaha https://t.co/4xHdzNxVY8

Probably only going to hear Rodgers and Davante are headed to Denver 400,000,000 times over the next 2 months https://t.co/wmhpsU1IRV

Better believe Nathaniel Hackett knows who he’d like to be his QB, and it ain’t Teddy Bridgewater or Drew Lock. https://t.co/Xm7lN7S9R5