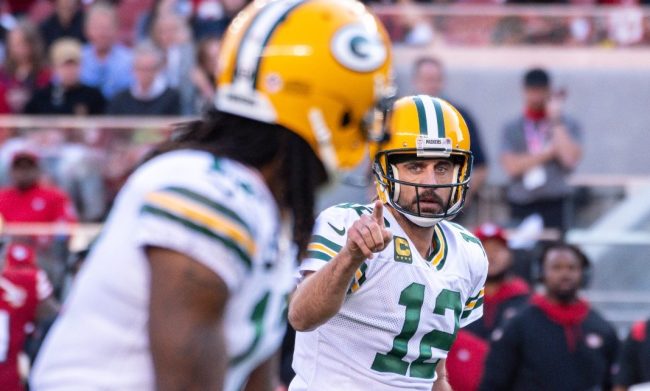 It’s been an interesting offseason for the Green Bay Packers this year as the franchise traded away Davante Adams. All eyes have been on this offense as many speculate who will be Aaron Rodgers’ favorite pass option. Many speculate that Allen Lazard is the top target for the veteran quarterback. However, based on early training camp reports, it sounds like a rookie receiver is making a strong case for himself.

During an appearance on the Pat McAfee Show, Green Bay Packers beat writer Matt Schneidman claims that Aaron Rodgers has given Romeo Doubs a ton of high praise. Rodgers likes what he’s seeing from Doubs, so much so that he felt the need to mention that the rookie’s performance in training camp so far is “very rare.”

"The player of Packers Training Camp so far has been Romeo Doubs" ~@mattschneidman#PMSLive #PMSFeelTheBeat pic.twitter.com/Nc1SPZowbZ

This is exactly what Packers fans hope to hear right now. The loss of Davante Adams could hinder Green Bay’s Super Bowl hopes. Regardless, it sounds like Aaron Rodgers is liking what he’s seeing from Romeo Doubs. He’s not the name many would expect, as the front office selected Christian Watson in the second round of the NFL Draft.

Doubs played four years at the University of Nevada where he accumulated 225 receptions, 3,322 receiving yards, and 26 touchdowns in his collegiate career. 20 of those touchdowns came in the final two seasons of his time in Nevada. Romeo Doubs blossomed as a top target in 2020 and apparently isn’t looking back now that he’s on the Packers.

Keep an eye on this rookie receiver, as he has a real chance to be a legitimate playmaker for years to come. If Aaron Rodgers likes Romeo Doubs this much, then Green Bay may have already found their replacement for Davante Adams.