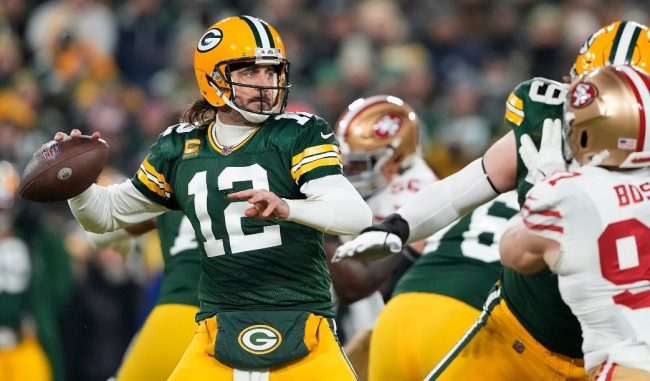 Aaron Rodgers returned to the Green Bay Packers after what turned out to be a dramatic offseason. Even so, he’ll be under center for the 2022 season, which bodes well for Green Bay’s chances. With that in mind, teammate Robert Tonyan reveals what truly makes Rodgers impossible to stop late in games.

Aaron Rodgers Makes It Up During Packers 2-Minute Drills

During an appearance on Bussin With The Boys, tight end Robert Tonyan opened up about what it’s like playing with Aaron Rodgers. He claims during two-minute situations where Green Bay must drive the field quickly that Rodgers makes everything up on the spot. That makes it extremely difficult to slow down and impossible to gameplan for.

The reason teams can't game plan for Aaron Rodgers' 2-minute drill is because he's making it up as he goes. @RobTonJr joined @BussinWTB presented by @ChevyTrucks: https://t.co/ywD6fs4KUI pic.twitter.com/hQs7geyjIr

No wonder Aaron Rodgers is still dicing up opposing defenses at 38 years old. You would think making up plays in the final two minutes would be difficult for his teammates, but according to Tonyan, it’s a part of what makes it exciting to play alongside the veteran superstar. Rodgers’ calm demeanor and expectations clearly keep his teammates focused on the field at all times.

Most teams utilize a two-minute drill play package. The play caller will choose which plays to run for that specific situation and then the team runs with it when it’s time to do so. However, Aaron Rodgers does it differently and it’s given the Packers a massive advantage over the years.

We’ll likely see more of this throughout the upcoming season, as Green Bay looks to secure the NFC North once again. With Rodgers under center, the Packers will have a fighting chance to make a Super Bowl appearance. Considering both sides of the ball are stacked with talent, this team should make some noise this year.