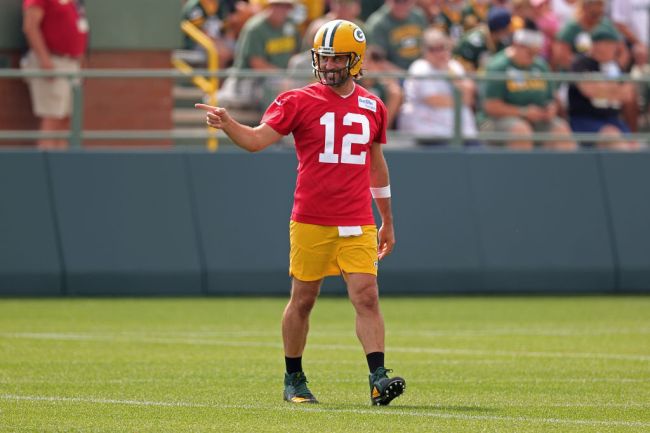 After a long, tumultuous offseason of “will he, won’t he,” Packers quarterback Aaron Rodgers showed up at training camp last week. Upon arrival, his friend, teammate and blindside protector (left tackle) David Bakhitiari surprised his signal-caller with a brand new Aston Martin…

Unfortunately, it doesn’t appear as though the fuzzy cover lasted long. Rodgers drove his brand-new, extremely expensive golf cart to Green Bay’s practice on Monday and had removed the pink accessory.

While his teammates pulled up in their Yukon Denalis and G-Wagons, AR12 arrived in his Aston Martin… golf cart.

Aaron Rodgers, driving his golf cart, waiting to get into #Packers players lot after practice. pic.twitter.com/G8kydIdGyz

Prior to his arrival at Lambeau Field, Rodgers was seen out on a joy ride— probably headed to practice. The 37-year-old was filmed at a stoplight on the corner of Mike McCarthy Way and S Onieda Drive.

Despite the slow flow of traffic, he came to a complete stop and followed all of the traffic laws.

The MVP casually rolling through town in his golf cart. While obeying traffic laws. And listening to music. #Vibe #PackersCamp pic.twitter.com/eCDpmi8zUY

Rodgers didn’t seem to have a care in the world as someone behind him honked his or her horn— presumably upset by a random person driving a golf cart on a main road, not knowing that it was who it was. Rodgers looked back at the person, paused for another moment, and then hit the gas and turned right.

Seemingly without a care in the world, he was jamming out to ‘Holiday In Spain’ by the Counting Crows. Bakhitiari really nailed it with the gift.