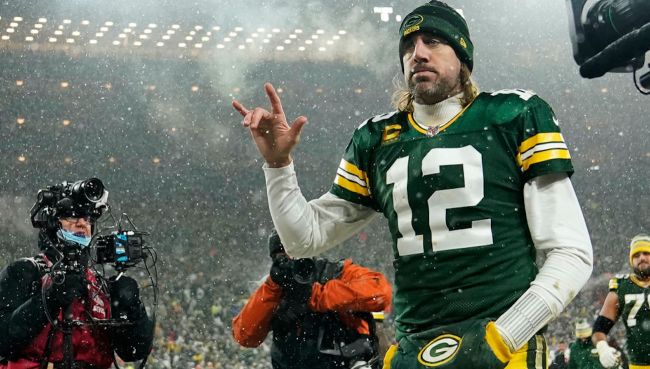 Green Bay Packers quarterback Aaron Rodgers fueled further speculation about his future on Monday night by taking to Instagram to post a cryptic message to his teammates and ex-girlfriend Shailene Woodley.

“Here’s some Monday Night Gratitude for some of the incredibly special people in my life, with some pictures from the last beautiful year,” Rodgers’ Instagram post — which led with a photo of a quote that states “Gratitude is the wine for the soul. Go on. Get drunk.” — began.

Rodgers then went on to thank his ex-girlfriend Shailene Woodley, with who he spent much of the last offseason prior to returning to the Packers. After getting engaged in February of 2021, the pair broke up just a few weeks after the Packers were bounced from the playoffs by the San Francisco 49ers.

“Thanks for letting me chase after you the first couple months after we met, and finally letting me catch up to you and be a part of your life,” Rodgers wrote to Woodley. “Thanks for always having my back, for the incredible kindness you show me and everyone you meet, and for showing me what unconditional love looks like, I love you and am grateful for you.”

Of the photos in the slide, it would appear that the tenth and final one — a photo of wide receivers Davante Adams and Randall Cobb — is the most important, at least as it relates to Rodgers’ future in the National Football League.

As noted by Ari Meirov and Adriana Torres on Twitter, Rodgers would usually stand between the pair of wideouts during the national anthem, however, in this photo — which was taken during the game he missed this season — it’s just the pair of them with the future Hall of Game signal-caller nowhere to be seen.

The last picture in Aaron Rodgers’ Instagram post is this one. He is in every photo he posted except this one.
He normally stands between Cobb and Adams for the national anthem…
(This looks like the game he missed in KC)
Could mean something or nothing. Time will tell. pic.twitter.com/JFmpiWLcGT

For what it's worth: Aaron Rodgers usually stands in between Davante Adams and Randall Cobb during the national anthem. The final picture in his Instagram post is a photo of Cobb and Adams with an empty space between them (from the game he missed). pic.twitter.com/VSIc7oCCLU

With Rodgers set to appear on The Pat McAfee Show Today, and Packers general manager Brian Gutekunst set to hold a press conference on Wednesday, NFL fans suspect that an announcement regarding the NFL MVP’s future could happen any day now.