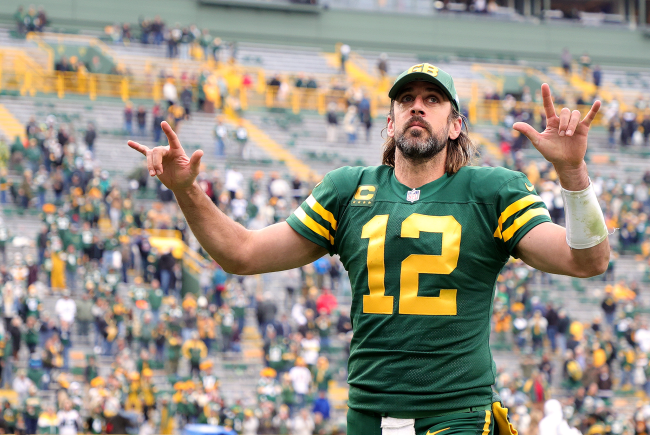 Back in August, a reporter asked Aaron Rodgers if he had been vaccinated against COVID-19. In response, the Green Bay Packers quarterback said that he had been “immunized.”

His comments led most people to believe that he had received the vaccine. Now, after testing positive for the virus and having his lack of vaccination revealed, Rodgers is acknowledging that his response may have been misleading.

The 37-year-old joined the Pat McAfee show on Tuesday afternoon and took “full responsibility” for his comments in August that could be perceived as deceptive.

"I acknowledge that I made some comments that people might have felt were misleading.. to anybody who felt misled by those comments I take full responsibility" ~@AaronRodgers12#PatMcAfeeShowLIVE pic.twitter.com/i9F7ojd8w8

This is the first time that Rodgers is taking responsibility for what he said in regard to his vaccination status. It will likely help some of the criticism pointed at him die down.

In fact, he addressed the condemnation that has come upon him later in the same interview.

First, McAfee asked Rodgers about the doctors with whom he consulted. He mentioned “Dr. Joe Rogan,” and asked who else that Rodgers spoke to about the virus and the vaccine. While McAfee stifled a laugh, his guest and friend also cracked a smile and a chuckle.

Then, in some ways, Rodgers avoided the question. Rodgers said that he talked with “about a dozen friends of his who dealt with COVID,” and mentioned that “Joe was one of them.”

The former NFL MVP then went on to say that he has no judgement or hate toward those who have said things about him. He believes that everybody is entitled to his opinion and went on to make a profound statement about his beliefs.

Additionally, he said that while he is grateful to have overcome COVID, he empathizes with those who have not and their loved ones.

Now that he has addressed the entire situation, Rodgers says that he is ready to move on and talk football. He also said that he expects to play Sunday against the Seahawks.