Aaron Rodgers Isn’t Changing His Opinions Or Beliefs Despite Pushback: ‘I Stand By What I Said’ 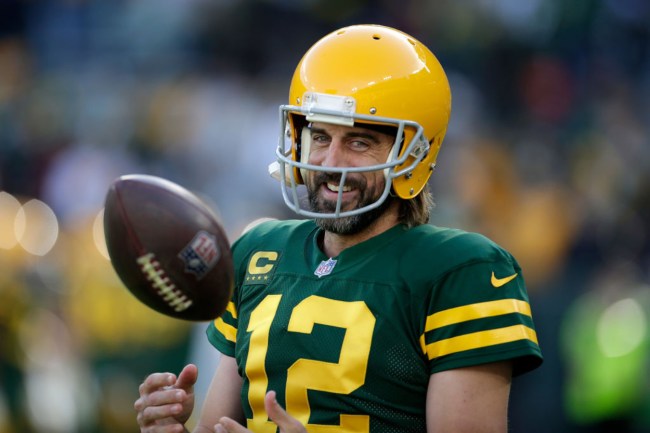 Aaron Rodgers has taken a non-stop beating from the media, fans, and countless other folks following his wide-ranging interview last week. Despite the strong pushback, he’s not about to change his beliefs or opinion on the matter at hand.

Rodgers joined ‘The Pat McAfee Show’ on Tuesday afternoon and addressed his situation and comments he made on Friday’s edition of the show.

Co-host AJ Hawk asked Rodgers if he had spoken with others since his eye-opening comments on Friday’s show, or if he felt it necessary to clarify his statements to anyone else.

Hawk essentially asked Rodgers if he wanted to clear the air about his vaccine comments, and Rodgers made it clear he doesn’t see any need to.

“I stand by what I said and the reasons why I made the decision,” Rodgers explained, which got quite the reaction from McAfee. “I’ve been really insulated to a lot of things and on my own choosing to just go inward and be reflective, meditative, and read.”

“I’m an athlete not an activist.. I shared my opinion & it was what I felt was in my best interest for my body,” Rodgers later explained during Tuesday’s show.

"Hate isn't going to bring us out of this pandemic & I'm not gonna hate on anybody who has said things about me. Everybody is entitled to their opinion & I will always believe that" ~@AaronRodgers12#PatMcAfeeShowLIVE pic.twitter.com/p05RgbkocF

Rodgers has found himself in quite an interesting spot over the last week or so.

After testing positive for COVID-19, it was shortly thereafter that it was revealed that he was not vaccinated. This caught most off guard seeing as how he said he had been “immunized” earlier in the offseason.

Rodgers was immediately labeled a liar, but the Packers and the NFL knew of his unvaccinated status.

Then, on Friday, he joined McAfee on his show and explained why he chose not to get vaccinated, which sent social media and the sports world ablaze.

Rodgers also mentioned that he consulted with Joe Rogan about not getting vaccinated, mentioned Donald Trump, Martin Luther King Jr., cancel culture, and plenty of other hot button topics during Friday’s show.