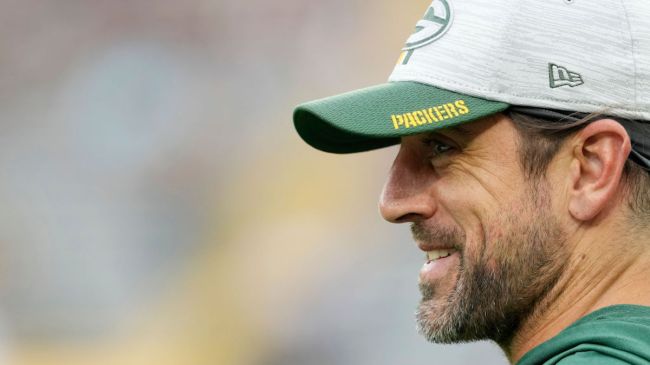 While Aaron Rodgers — the back-to-back NFL MVP, bringing his total to four — might be at the peak of his playing powers these days, his public appeal is perhaps in a more precarious position than ever as a result of his “immunization” controversy last season.

Once one of the most unanimously well-liked players in the National Football League, there is now an undoubtedly large group of football fans that no longer “like” Rodgers, as evidenced by this recent op-ed published in The Guardian, which is one of England’s most iconic newspapers as it was originally founded in 1821.

In an article published on Friday — titled is Aaron Rodgers America’s most interesting athlete or its most annoying — the author, who points out that this perception of Rodgers is quite new, said the future Hall of Famer used to be “an extremely talented but mostly unremarkable fixture of the American sporting scene.”

Now, The Guardian argues, “Rodgers has become that most relentless of sporting cliches: the athlete who cannot be mentioned in news reports without the addition of the qualifier “controversial”.

The cleanskin quarterback, avatar of the league’s “good guys”, has been transformed into a symbol of national polarization. Rather than declaiming earnestly on the moral rot of cobalt mining in central Africa, Rodgers is more likely these days to be found on Joe Rogan’s podcast or The Pat McAfee Show, complaining about the “woke mob”. There’s speaking out and there’s this: speaking incessantly, without pause, and mostly about yourself. [via The Guardian]

The fact an article like this is even published further highlights how different Rodgers’ current reputation is compared to what it was five or ten years ago.

Rodgers, who will have to beat out a rampant Josh Allen if he wants to win a third straight MVP award, will kick off his 2022 season when he and the Green Bay Packers take on Kirk Cousins and the Minnesota Vikings on Sunday at 4:25 p.m. EST.

RELATED: NFL Fans Think They Figured Out Which Game Aaron Rodgers Was On Percs After QB Admits To Playing On The Painkiller