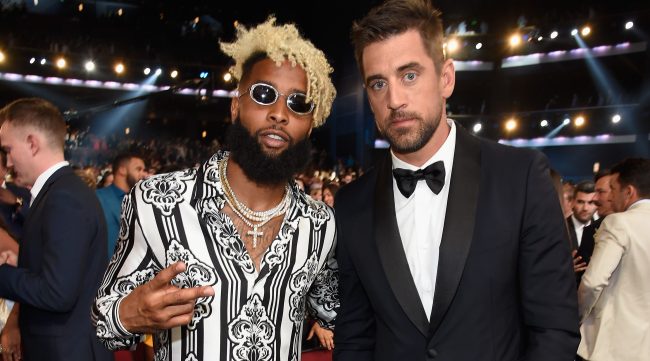 Thus, when the 29-year-old was released from the Browns late last week, he quickly became the top story in the NFL. Would he clear waivers? Where would he sign? And for how much money?

Over the course of the last few days, a lot of speculation began to swirl. He was first rumored to Seattle, and then to New Orleans, and then Green Bay, and as of this morning— Los Angeles.

Well, as of Thursday afternoon, the Rams made it official and announced that they had agreed to terms with OBJ. NFL fans reacted accordingly.

Through all of the “he said, she said,” one thing that was confirmed prior to Beckham’s signing was that he wanted to play for a contender with an elite quarterback. After hearing that he said that, people immediately began to connect him to joining Aaron Rodgers and the Packers.

And then he went in a completely different direction.

Now that OBJ is on his way to the City of Angels, an video has gone viral from one of Rodgers’ old press conferences. In the media session, he said that “Green Bay isn’t a huge vacation destination, people are coming here to play with me and to play with our team, knowing that they can win a championship here.”

Although Rodgers isn’t wrong, OBJ made it very clear that he would rather sign elsewhere, live in a vacation destination and compete for a championship— without Rodgers. Tough.