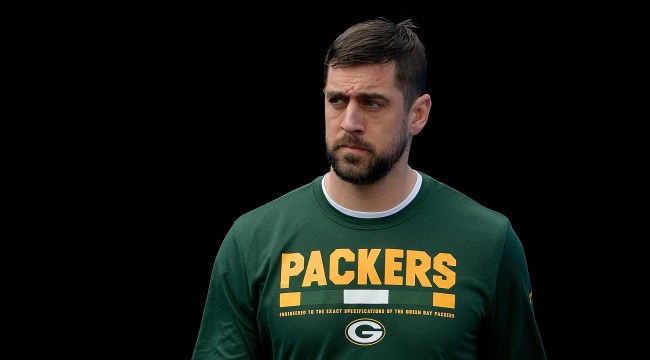 It was an interesting offseason for the Green Bay Packers this year that definitely did not come without a little controversy and drama after selecting Utah State quarterback Jordan Love 26th overall in the NFL Draft. As we all know, winning heals all and the Packers have done a whole lot of winning this season.

Currently, Green Bay sits at the top of the NFC North at 8-3 and although the Pack did not provide Aaron Rodgers much offseason help on the offensive side of the ball, the offense seems to be firing on all cylinders. Rodgers joined ‘The Pat McAfee Show’ this week and seemed to have taken a shot at the Green Bay front office when discussing his legacy.

“I think when it comes to records and milestones, I love them, I do take pride in them,” Rodgers explained. “I think they are more things you look back on when you are done playing, I don’t think I am done by any stretch of the imagination, even though some people may have thought so in the offseason.”

Now say what you want, but there is no way that this is not Rodgers taking a direct shot at Green Bay general manager Brian Gutekunst and the entire front office. I love it to be honest, how can you not?

Many counted Rodgers out for his age and insisted his game would start to decline, he has responded by being in talks as an MVP candidate right next to Chiefs superstar Patrick Mahomes. So if QB 1 wants to take a jab here and there when he gets a chance, by all means, he should. Rodgers gives weekly Tuesday interviews on The Pat McAfee show and has been bringing nothing but laughs and entertainment there week after week.