Old, Wily Veteran Aaron Rodgers Will Sometimes Fake A Helmet Malfunction In Order To Call His Own Offensive Plays 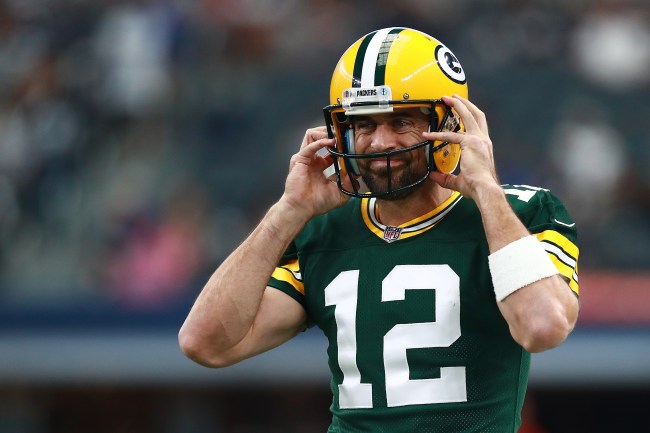 Given the fact Aaron Rodgers has accomplished so much in his NFL career, the future Hall of Famer usually gets the benefit of the doubt while doing something. That means he can improvise when necessary. It means he can get away with a little more than others; especially when it comes to his look for his official season photo. It means he can act like a prima donna and write it off as just being part of his competitive spirit. And it means that he can go against his coaches in order to call the play he wants to.

That last part is something that the eight-time Pro Bowler admitted today when appearing on the Pat McAfee Show, telling both McAfee and Rodgers’ former Packers teammate A.J. Hawk that he’ll slyly fake a helmet malfunction to purposely ignore the calls from his coach. Guys, this is fucking brilliant — and Aaron Rodgers is probably only one of a handful of quarterbacks who can get away with it. Take a listen below at what he had to say about doing it every so often.

"I've done that a few times & every now & then it's real"@AaronRodgers12 on if he ever acts like the speaker in his helmet isn't working so he can call his own plays #PatMcAfeeShowLIVE pic.twitter.com/rf5hxZRIjb

You’ve got to admire the true candidness from Aaron Rodgers here, absolutely giving zero fucks that this little admission will surely get circulated around to his teammates and coaches. Hey, it doesn’t seem like the dude cares much, knowing that, at times, he’s got to take matters into his own hands and go with a play that works best.

Of course, Rodgers tries to backtrack and change the topic to helmet malfunctions happening every so often, and how he’ll be forced to call a play, instead of hearing what a coach is barking in his ear. But, sorry Aaron, we know this is just your way to cover up the fact that you’re the sheriff in Green Bay and you do things your own way at times.

I’m not so sure a shitty quarterback would have such a positive reaction if he admitted to doing something like this, but, put some respect on Aaron Rodgers’ name, man, because his successful resume speaks for itself — and it’s totally cool if he pulls a stunt like this every once in awhile.