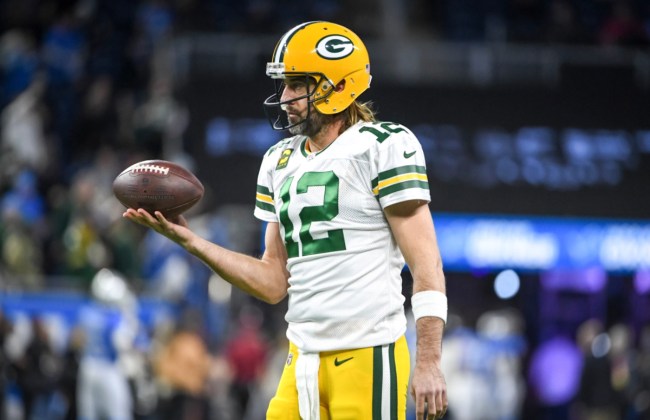 Now you’re all in big big trouble. With the way that Aaron Rodgers has been playing over the last couple of months, you could be forgiven if you had entirely forgotten that he’s been playing on a fractured toe.

The man has put himself easily in the MVP discussion and many believe he should be the favorite for the award. Now he could be even more difficult for defenses to stop.

Today, at media availability, Aaron Rodgers gave us some insight into how he’s been handling the toe.

“That’s been the most encouraging thing. Got through last week without doing one. It was just a pretty standard shot in the toe—very painful, but numbing agent. So that helped me get through the games. The whole goal was to be able to not have to do that and it’s been a few games now without doing that.”

He continued and gave a very promising update on the health of his toe.

The idea of Aaron Rodgers getting back to 100% should be troubling to the rest of the league. The Green Bay Packers have a bye in the first week of the playoffs and home-field advantage in the NFC.

The week off will give the Packers all the opportunity they need to get healthy. They already got David Bakhtiari back over the weekend and they’re expected to get a couple of boosts to defense with the returns of Jaire Alexander and Za’Darius Smith.

A fully healthy Aaron Rodgers is just icing on the cake for the NFC’s top squad. As good as they’ve been all year, this Green Bay Packers squad could be especially scary starting next weekend.