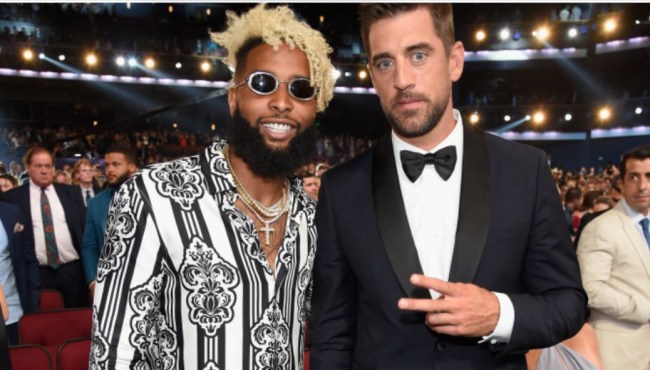 Aaron Rodgers has finally reacted to the team’s pursuit of Odell Beckham Jr.

🚨 This Just In: #Packers front office is the main reason why they failed to land Odell Beckham, Jr., per sources. I’m told HC Matt LaFleur wanted OBJ, believing his acquisition would be both seamless/positive for GB offense. FO lowballed Beckham, while the #Rams believed in him. https://t.co/szY3f6Yffq

Sources say #Packers front office never really bought into OBJ, causing him to feel disrespected. Had they changed their stance and come up even a little bit from the vet min offer, Odell Beckham is a Green Bay Packer today – preparing to face the #Seahawks at Lambeau. https://t.co/MzortRcKmE

#Packers foolishly only offered Odell Beckham the vet minimum. #Rams blew that out of the water with a deal loaded in incentives – but also with more guaranteed money – totaling $4.25M. It’s a win-win and a monster move for an already stacked offense. https://t.co/szY3f6Yffq

While some fans were angry with Green Bay’s approach, Rodgers was happy that the Packers were “in the mix” to sign Beckham but admitted the team was hamstrung by salary cap limitations.

“I think that we are obviously limited with our salary-cap situation. I’m not sure what he ended up signing for, but I’ve been friends with Odell for a long time and have so much respect for his talent and his ability, and I wish him the absolute best in L.A.”

“I think there was a lot of conversations around bringing him in, and for whatever reason, it just wasn’t the right fit,” “But I feel good about the fact that we were in the mix.”