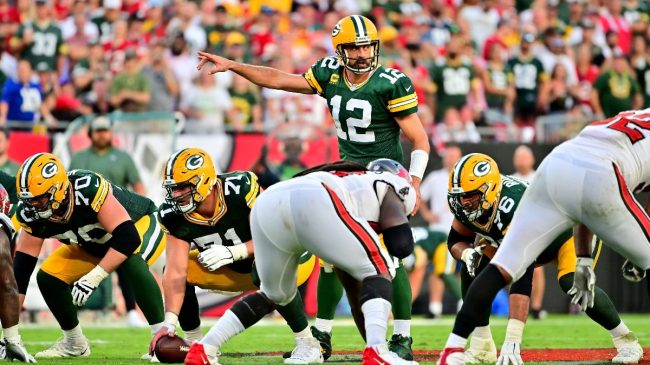 The Green Bay Packers were able to outlast the Tampa Bay Buccaneers. Aaron Rodgers seemed to find a special connection with rookie receiver Romeo Doubs. So much so, that he apparently put up a statline by a Green Bay receiver not seen since Davante Adams. The superstar quarterback seemed to be just as surprised as everyone else.

Matt Schneidman mentioned a unique stat to Rodgers “According to Demovsky Stats & Info, Romeo Doubs was the first Packers wide receiver not named Davante Adams with eight catches in a game since Week 1 of 2018 (Randall Cobb).” Aaron Rodgers’ eyes get big and he immediately says “wow” after learning of the stat.

According to Demovsky Stats & Info, Romeo Doubs was the first Packers receiver not named Davante Adams with eight catches in a game since Week 1 of 2018 (Randall Cobb).

Aaron Rodgers’ reaction when I told him that😂👀 pic.twitter.com/5D2Y3VwbYw

Romeo Doubs generated a ton of hype throughout the offseason. Rodgers routinely talked up the Packers’ rookie wide receiver often, putting Doubs on everybody’s radar. However, in just his third game of action, Doubs looked as reliable as Davante Adams, which bodes well for Green Bay in general.

Although the Packers drafted Christian Watson in the second round of the NFL Draft, it’s been the Romeo Doubs show in the wide receiver room. Aaron Rodgers seems to enjoy throwing him the ball. That will be especially true after learning how well his rookie played on Sunday against the Buccaneers.

We’ll see how much more involved Doubs can get. He’s quickly building chemistry with Aaron Rodgers. Considering the receiving core has been lackluster, Green Bay could use an emerging star in the passing game.