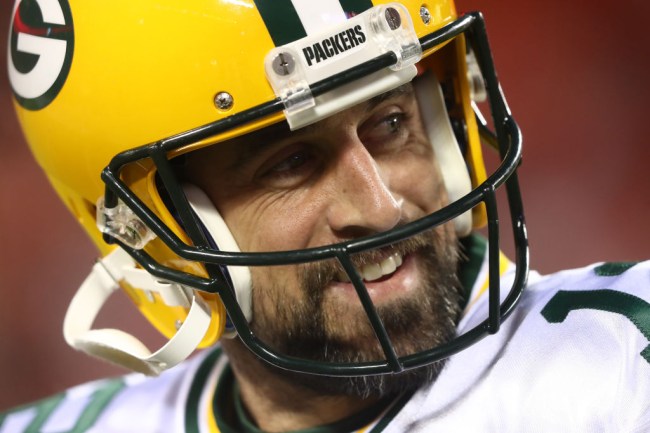 Aaron Rodgers threw a touchdown pass against the Chiefs on Sunday night that surprised everyone watching and he honestly may have even surprised himself as well.

On a 3rd-and-1 play from the Chiefs’ three-yard line, Rodgers was under pressure and after being pushed out of the pocket tossed a pass towards the corner of the endzone. It completely looked like a throw away, but somehow running back Jamaal Williams got his hands on it for the touchdown.

You can be the judge on this one as to whether the pass was intentional or not, but the ball was absolutely put on the money when it was all said and done.

After the game, Chiefs safety Tyrann Mathieu told reporters he truly believed it was a throw away.

Williams claimed that he and his quarterback made eye contact and he simply went over and made the catch.

“When we met eyes, I just seen him throw it and then after that, I’m just like, ‘Hmm, this ball looks like it’s going in the corner. Might as well go and run after it,'” Williams said.

Rodgers wouldn’t necessarily call the pass a throw away, but he did say it was a ‘safe’ throw.

It seemed like there wasn’t anybody in the back of the end zone, so I felt like it was a safe throw.”

I guess when you’ve got it like that, good things come your way. Rodgers is arguably the best quarterback in the NFL and that touchdown throw is a great example of just how elite (and sometimes lucky) the man is.

The Packers went on to win the game 31-24. Rodgers has the second-most touchdown passes in the league with 16, just one fewer than Russell Wilson.