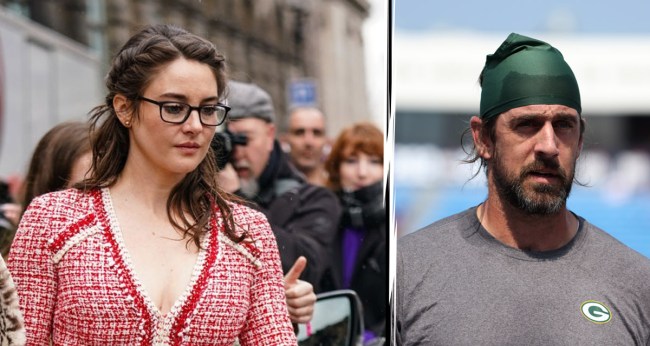 Last we heard, Shailene Woodley had plans to be in Green Bay with her fiance Aaron Rodgers during this NFL season. “They don’t like to be apart for too long,” a source close to the couple reported.

However, based on a new pictorial of Aaron Rodgers for Haute Living that was just published on Thursday, it turns out that may not be the case. Sad.

In Rodgers’ interview with Haute Living, it states, “Unfortunately, the one downside of another season in Wisconsin is four months away from his fiancée, actress Shailene Woodley, who’s based in L.A.”

“It’s a busy work time for her, so [my decision] probably came at a good time for both of us to be able to focus on our work,” said Rodgers about his deciding to play this season. “I think it’s going to be a good thing. I mean, her work was shut down for an entire year, and she’s booked a number of projects. She enjoys working and her own routine, which I obviously enjoy, too.”

Obviously. That and “cuddle time.”

Dude wants to be Tom Brady so bad it hurts.

Speaking of playing football, Rodgers also told Haute Living, “The one thing I never want to come across as is somebody who’s got it all figured out. Most of the stuff that I regurgitate is stuff other people have said or talked about. The other part is my own contemplation.

“But what I do enjoy is passing knowledge to my teammates about time: my time as a young person making mistakes, my time as the older guy on the team with wisdom to pass down. But I don’t have all the answers. We’re all works in progress.

“There’s no hierarchy when it comes to knowledge for me. I love learning, I love sharing what I’ve learned. I love the back and forth with people who disagree with me or don’t quite understand what I’m saying. [For example], I look forward to my morning talks with [religious teammate punter JK Scott] about my idea of spirituality and his idea of Christianity. I couldn’t be having those types of conversations if I wasn’t here in Green Bay.”

“What I always try to show the younger quarterbacks, from a professional standpoint, is that every mistake they’re going to make, I have made.

“When I was younger, Brett Favre said that to me. He said it as a throwaway kind of comment, but just him saying that to me made me feel better about making mistakes. Like, it’s okay if one of the greatest players of all time has made a ton of mistakes. So I just remind the guys occasionally, ‘Hey, dude, whatever you’re going to do out there, you might think it looks terrible and stupid, but I promise you I’ve done the same thing over and over.”

No, really, that’s what he said. He’s like A-Rod and TB12 all rolled up into one. Next thing you know Rodgers will be starting his own lifestyle brand, AG12.

This is an Aaron Rodgers appreciation tweet for obvious reasons. pic.twitter.com/FLuSia3t3Q