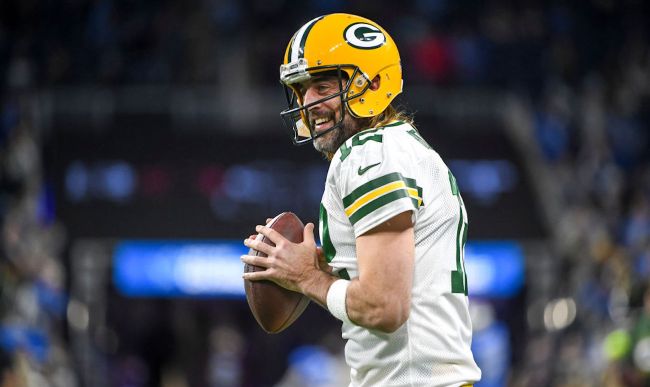 While Aaron Rodgers is gearing up for what’s set to be one of his final shots at winning a Super Bowl, the 38-year-old defending MVP seems plenty relaxed as he heads into Saturday’s divisional round matchup against the San Francisco 49ers, as he used a recent interview to fire off a shot at Tampa Bay Bucs QB Tom Brady.

During an interview with Sportsnet, Rodgers squeezed in a quick shot at Brady, as he grabbed a football and said, “This is too firm for the Patriots,” which is a reference to the team’s Deflategate scandal from some years ago.

Both Rodgers and Brady will look to add to their legacy this weekend in the Divisional Round of the NFC Playoffs. Rodgers, who put together another MVP caliber season leading the Green Bay Packers to a 13-4 record and the top seed in the NFC, will take on the San Francisco 49ers at Lambeau Field on Saturday night at 8:15 p.m., while Brady and the defending champion Tampa Bay Buccaneers will be hosting Matthew Stafford, Sean McVay and the #4 seed Los Angeles Rams at Raymond James Stadium on Sunday at 3 p.m.

Over in the AFC, the top-seeded Titans will be hosting Joe Burrow and the upstart Cincinnati Bengals in Tennessee on Saturday at 4:30, while Josh Allen and the #3 seed Buffalo Bills will be heading to Kansas City to take on Patrick Mahomes and the two-time defending AFC champion Kansas City Chiefs.

RELATED: Aaron Rodgers Shares New Details About His Toe Injury, How It Feels Heading Into Playoff Matchup Against 49ers