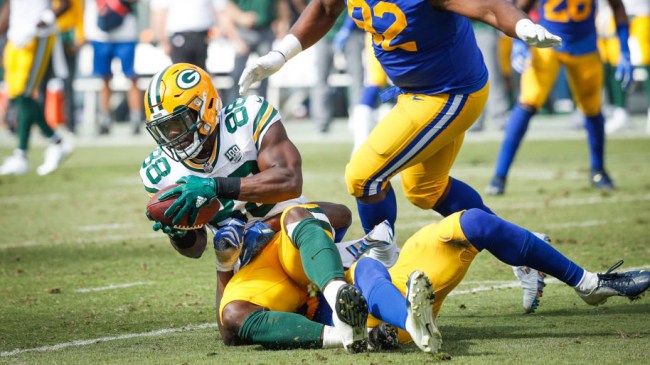 Remember how much Green Bay Packers fans and players loved Ty Montgomery when he did so well filling in for injured running backs Eddie Lacy and James Starks in 2016? Those days are long gone. You know what else might be long gone? Ty Montgomery.

That’s because Montogmery, who showed tremendous football smarts in 2016 when fielding kickoffs, showed a clear lack of it when he returned a kick that he should have taken a knee on during Sunday’s loss to the Rams.

In case you missed it, with the Rams up 29-27 and kicking off to Green Bay with 2:05 remaining, Montgomery fielded the kick in the end zone and rather than take a knee he decided to run it out only to fumble giving the Rams the ball at the Packers’ 21-yard-line and the game.

The worst part of it might be the fact that Packers coach Mike McCarthy said after the game that Montogmery was specifically told to take a knee in that situation.

“The plan there is to stay in the end zone,” said McCarthy. “There’s decisions and Ty’s in that decision situation, and I’m sure Ty was trying to make a play.”

Needless to say, Montgomery’s teammates, and more specifically, quarterback Aaron Rodgers were not pleased with his decision.

According to Mike Silver of NFL.com…

In the eyes of many of Rodgers’ teammates, his ire was justifiable. According to more than a half-dozen Packers players and coaches who witnessed it, Montgomery had thrown a tantrum of his own on Green Bay’s previous offensive series, becoming noticeably enraged on the sideline after being removed from the game. At least one player believed there was carryover from that incident to Montgomery’s decision to disregard his coaches’ instruction and return the kickoff.

“They took him out (the previous drive) for a play and he slammed his helmet and threw a fit,” one Packers player said. “Then (before the kickoff) they told him to take a knee, and he ran it out anyway. You know what that was? That was him saying, ‘I’m gonna do me.’ It’s a f—– joke.

”I mean, what the f— are you doing? We’ve got Aaron Rodgers, the best I’ve ever seen, and you’re gonna take that risk? I mean, it’s ‘12’! All you gotta do is give him the ball, and you know what’s gonna happen.”

#Packers QB Aaron Rodgers reacts to Ty Montgomery's fumble, sealing a victory for the #Rams. Once again, Rodgers is denied an opportunity to lead a comeback pic.twitter.com/OuMZRiLeFT

Montgomery refused to speak with reporters after the game, so we have yet to hear his side. Also, there’s no guarantee that the Packers would have scored and won the game. None of that, of course, has stopped Packers fans from going mental and vehemently going after Montgomery on social media.

I feel bad for Ty Montgomery. There are some crappy people on Twitter. All these people should be suspended. Keep your head up brother pic.twitter.com/FJhWsHrldV