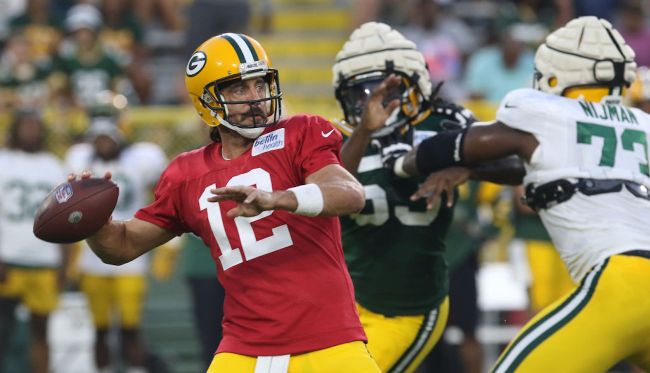 While Aaron Rodgers may have found enlightenment this summer, finding open receivers hasn’t been as easy, as reports out of Green Bay Packers training camp seem to indicate that the back-to-back MVP already misses the services of Davante Adams.

Speaking to reporters earlier this week, Rodgers bemoaned some of the growing pains that his young wide receiver core has been going through, particularly when it comes to drops and general inconsistency.

“The young guys, especially young receivers, we’ve got to be way more consistent,” Rodgers told reporters. “A lot of drops, a lot of bad route decisions, running the wrong route. We’ve got to get better in that area.”

While Rodgers has recently claimed that he believes Allen Lazard can step up and become the team’s leading pass-catcher, the 26-year-old former undrafted free agent has never had more than 60 catches and 513 yards in a season, both of which came last year. He did, however, catch eight touchdowns, which was tied for the 16th most in the National Football League.

Aaron Rodgers and the rest of the Green Bay Packers will kick off their 2022 season when they take on their NFC North divisional rivals the Minnesota Vikings on Sunday, September 11 at 4:25 p.m.

RELATED: Aaron Rodgers Has A Bust Of Nicolas Cage In His Locker And His Explanation Raises Even More Questions