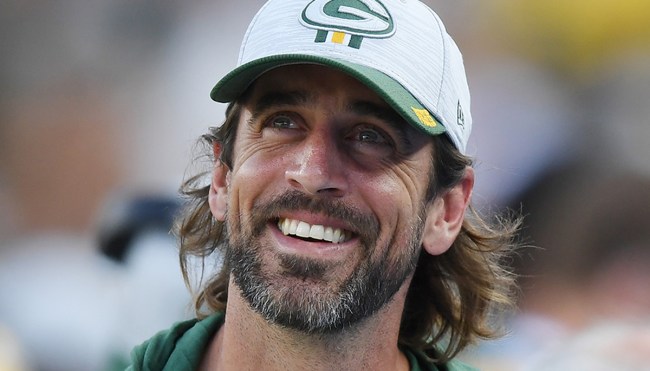 It’s hard to think of many NFL players who had a more interesting offseason than Aaron Rodgers, the absolute headline machine who accidentally convinced people he was going to retire, admitted to partaking in an enema-centric 12-day cleanse, and bounced back from his breakup with Shalene Woodley by getting his first tattoo after striking up a new relationship with the co-founder of a “modern mystery school for women” who had to clarify she is not a witch.

As a result, all eyes were on the Packers quarterback when he rolled up to training camp last month—and he took full advantage by doing his best Cameron Powe impression with the help of the long hair and tank top that transformed him into the spitting image of Nicolas Cage’s character from Con Air.

If you had any doubts the veteran QB was a fan of the eccentric actor after seeing that clip, it seems like they can be put to rest after Rodgers showed off the newest addition to his locker while chatting with reporters in Green Bay on Tuesday: the bust of Nic Cage he proudly displayed for all to see after plucking it from the top shelf.

Aaron Rodgers has a Nic Cage head in his locker pic.twitter.com/D1TOtEbWWg

Aaron Rodgers explains why a Nicolas Cage bust is in his locker…😂 pic.twitter.com/hNXAk4sjhc

Why? Well, Rodgers didn’t really shed a ton of light on the new addition, saying, “Somebody just sent this to me yesterday with no message” (which sounds like something Nicolas Cage’s character would do as part of an elaborate plot to infiltrate a federal government building in a National Treasure movie).

However, if the enthusiasm in his voice and the look of unbridled excitement on his face are any indication, whoever was responsible for the gift absolutely nailed it.