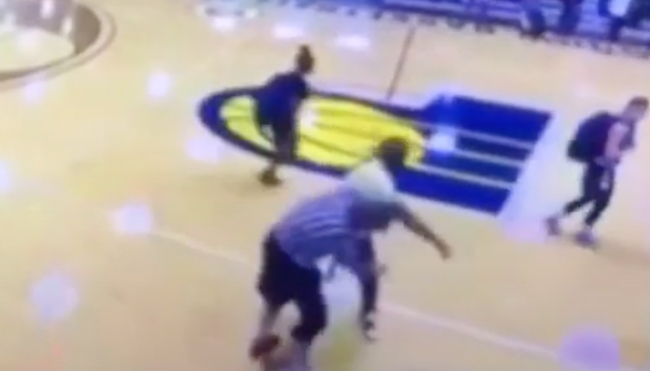 As someone who briefly played for an AAU basketball team in high school before quickly realizing I was not about that life, I got a firsthand look at how insanely serious some people can get over a bunch of teenagers playing a game.

I’m primarily talking about the parents who shell out thousands of dollars a year on gear and the expenses that come with traveling far and wide in the hopes it’ll eventually pay off in the form of an NCAA scholarship or even a possible early retirement if their kid eventually lands a sizeable professional contract.

As a result, refs were routinely subjected to an amount of ire and scorn they did not get paid enough to deal with. Even though I was only on the team for a few months, there were multiple occasions where someone’s dad pulled a Richard Kiel in Happy Gilmore by promising to meet an official in the parking lot because they didn’t call a travel or a three-second violation.

I never personally witnessed anyone following through on that promise to throw down, but it’s definitely happened on a number of occasions, including a wild incident where an AAU team ganged up on a ref during a game in Atlanta a few years ago.

However, that fracas has nothing on what unfolded during another AAU contest that was recently played in Indiana that came to an incredibly premature end after one squad walked off the court in protest before the first quarter even came to an end.

As the team was leaving the floor, the official who was presumably responsible for the call was approached by a guy who decided to pull out his phone to record him. It appeared the ref did not appreciate being filmed, as tensions officially boiled over after he threw a punch at the man, who responded in kind before a few more people—including one of the young female players—got in on the action.

However, things came to a fairly swift end when the dude the ref tried to clock managed to execute an absolutely textbook over-the-head body-slam in the middle of the court.

This just goes to show you should never underestimate the lengths Basketball Dads are willing to go.