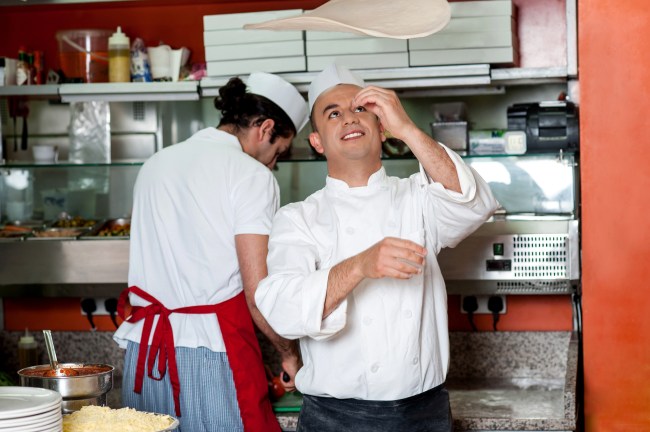 That summer ‘dead zone’ between when the NBA and NHL playoffs end and the NFL starts is nearly over but not before ESPN cashed in by airing a full day of ‘The Ocho’ which was inspired by the movie Dodgeball.

‘The Ocho’ gets a full 24-hours of programming on ESPN2 and it pays tribute to the obscure sports in the world that don’t get enough attention. These sports include everything from Cornhole to Spikeball, Lawnmower Racing to the Acrobatic Pizza Trials.

Personally, I was partial to the 46th Annual Cherry Pit Spitting Championship which aired at 1pm but EVERYONE seemed to lose their minds the hour before when the 2019 US Pizza Team Trials aired at noon. The Acrobatic Pizza Trials tapped into that ‘holy shit, what is this?!? I love it’ mentality that pops up every few months on Twitter.

The reactions to the 2019 US Pizza Team Trials were amazing so I thought I’d share some of the best ones below for anyone out there who missed the pizza trials. Here’s how it all went down:

The Acrobatic Pizza Trials are EXACTLy what you think they were:

At the gym watching Acrobatic Trials for the United States Pizza Team on ESPN! 😂 #ESPN8 #TheOcho

THIS IS TV GOLD! pic.twitter.com/1C3NoAygQH

Even better with a soundtrack:

Even the Acrobatic Pizza Trials are better when set to the Titanic song. #ESPN8 #TheOcho pic.twitter.com/jcdxoSmahM

. @espn hello, I will do anything for the Acrobatic Pizza Trials announcing job.

I tell ya what, if you didn't watch the Acrobatic Pizza Trials on #espn8 the OCHO…then you missed out

Also, my dudes, don’t sleep on Chess Boxing. This could be the future of Sports right here:

ESPN really needs to run ‘The Ocho’ at least once a week instead of once a year. The people deserve more of this programming.