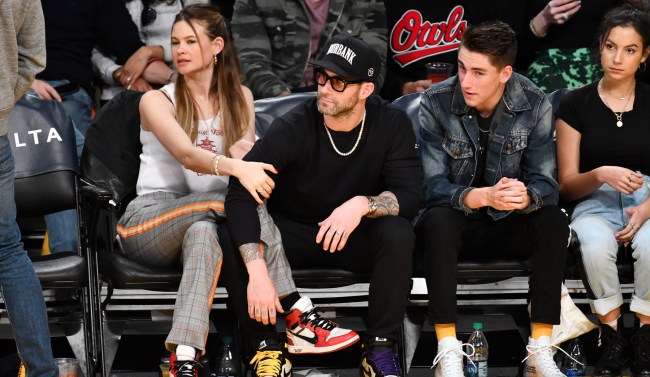 After wussing out on the Super Bowl LII halftime show press conference, something stars like Prince, Lady Gaga, Justin Timberlake and Katy Perry happily participated in, Maroon 5 frontman Adam Levine has finally broken his silence with regard to the show and the controversy surrounding it.

After reportedly struggling to find an artist who is willing to perform with them at Super Bowl LII, the NFL issued a statement this past Tuesday which read…

Maroon 5 has been working hard on a Pepsi Super Bowl LIII Halftime Show that will meet and exceed standards of this event. As it is about music, the artists will let their show do the talking as they prepare to take the stage this Sunday. Starting with the Pepsi Super Bowl LIII Halftime Show announcement, we began a cross-platform rollout of behind-the-scenes footage and content from each of the halftime performers. Instead of hosting a press conference, this social and digital media rollout will continue through Sunday across our owned and operated media assets as well as through the platforms of the artists.

All they accomplished with that move was making it appear as though the NFL and Maroon 5 simply didn’t want to face the music, so to speak.

CONFIRMED: @JWilliamsWDEF and I can verify that #SpongeBob WILL BE USED during the Pepsi Halftime Show!

On Thursday, Entertainment Tonight aired an interview with the 39-year-old Levine where he finally addressed the issue.

“I think that when you look back on every single Super Bowl halftime show… people just can’t… it’s this, like, insatiable urge to to hate a little bit,” Levine told Entertainment Tonight. “I’m not in the right profession if I can’t handle a little bit of controversy.”

“No one thought about it more than I did,” Levine later added. “No one put more thought and love into this than I did. … I spoke to many people, most importantly though, I silenced all the noise and listened to myself, and made my decision about how I felt.”

He also said that the band will address the controversial issues during their Super Bowl halftime performance and people’s voices will be heard.

“They will be [heard], that’s all I want to say because I don’t want to spoil anything,” explained Levine. “And once again, I like to think that people know where I stand as a human being after two decades doing this. I’m not a speaker. I’m not a public speaker. I do speak, but it’s through the music. My life’s work and what I put out into the universe has been positive and hopefully inspiring… So, what I would say is, you know, we are going to do what we keep on doing, hopefully without becoming politicians and continuing to use the one voice we know how to use properly.”

Watch his entire interview with ET’s Kevin Frazier below.

Also, if Adam Levine can’t beat this Super Bowl halftime moment, then he might as well not even show up.