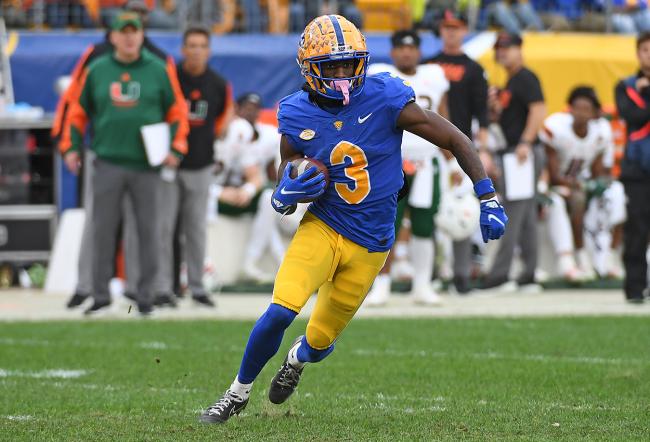 Pittsburgh football went 11-3 in 2021 and earned a New Year’s Six Bowl appearance. However, it lost two of its biggest offensive stars during the offseason.

Quarterback Kenny Pickett was selected in the first round of the NFL Draft and reigning Biletnikoff Award winner Jordan Addison chose to transfer. The former’s exit likely played a role in the latter’s decision to leave. As did Name, Image and Likeness opportunities, according to reports.

Addison, who ended up at USC like everybody though from the get-go, caught 100 passes for 1,593 yards and 17 touchdowns in 2021. He helped lead the Panthers to the fifth-ranked offense in terms of total yardage and the eighth-ranked offense overall.

And then he left. While Pickett and money were factors, Addison’s now-former team’s new offense may have also been part of his reasoning for transferring.

Pittsburgh head coach Pat Narduzzi spoke about former offensive coordinator Mark Whipple, who left for the same job at Nebraska during the offseason, and tried to throw him under the bus during a recent appearance on the Shults Ford podcast. It totally backfired.

“Our old offensive coordinator had no desire to run the ball,” Narduzzi said. “Everybody knew it. He was stubborn. Wake Forest was 118th in run defense and we threw the ball every down. When we ran it, we ran it for 10 yards but that wasn’t good enough.”

Speaking specifically to the Wake Forest game, as Narduzzi did— well, Pittsburgh won the game 45-21. Pittsburgh also averaged 2.9 yards per carry in that game, which included a 58-yard run from Pickett. So perhaps throwing the ball was a good idea.

In addition, Whipple ran an offense that “had no desire to run the ball,” but finished third in the nation in scoring, had the only quarterback drafted in the first three rounds, and had the best wide receiver in the nation. So clearly it worked out just fine.

And if the old offensive coordinator wanted to throw the ball around the field, and the new offensive coordinator is putting a more significant emphasis on the run game— maybe Addison didn’t want to play in a run-first offense? Maybe that was part of why he joined Lincoln Riley’s offense in Los Angeles? Why would he stay at Pittsburgh if Pittsburgh’s head coach is actively diminishing the role he played in one of the best offenses in the nation?

After Narduzzi’s comment made its way online, he rightfully got roasted. Whatever point he was trying to make did not come across in the way that he wanted. Epic fail.