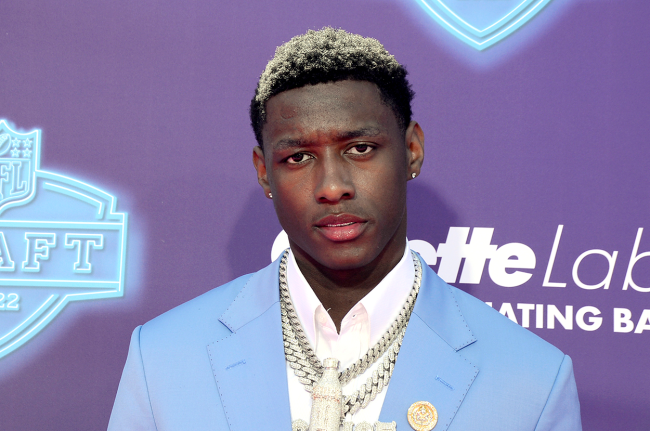 After a remarkable year at Cincinnati, Ahmad Gardner became the newest member of the Jets on Thursday night. The man better known as ‘Sauce’ was selected fourth overall in the NFL Draft and is headed to N̶e̶w̶ ̶Y̶o̶r̶k̶ New Jersey.

Not only does Sauce have the best nickname in this year’s class, he also had the most creative drip on draft day. Gardner pulled up to Las Vegas in a clean baby blue suit.

In addition to the fresh ‘fit, the former Bearcats cornerback had plenty of ice around his neck. Most notably, he walked the red carpet rocking a diamond sauce bottle chain and it could not have been more glorious.

Ultimately, Gardner ended up hearing his name called early and quickly turned around to get on a flight to the Meadowlands on Friday. He and his fellow first round picks were officially introduced by the Jets and Gardner still had the chain around his neck.

Upon landing in New Jersey, general manager Woody Johnson asked his first overall pick a question that many may not have thought to ask. (I certainly didn’t.)

Is there actual sauce in Sauce Gardner’s sauce bottle chain?

As it would turn out, there is. Gardner keeps it fully loaded at all times.

While some people carry Sriracha on their keychain, Gardner carries all kinds of sauce around his neck. He’s like that.