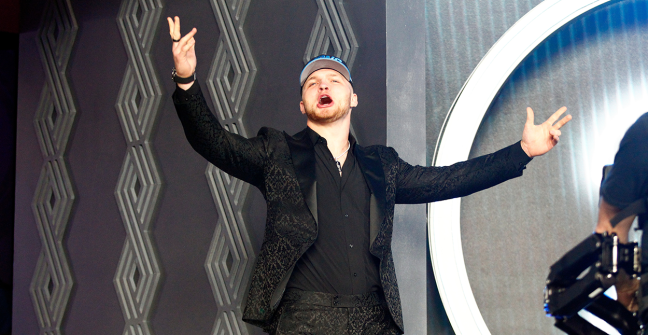 With the No. 2 overall pick in the 2022 NFL Draft, the Detroit Lions selected Michigan edge rusher Aidan Hutchinson. The 22-year-old Heisman Trophy runner-up is from the state, played his college ball in-state, and is staying home to begin his professional career.

There is a lot of hype around Hutchinson’s potential as a player and he better hope that things work out because he does not have a career as a singer. That was on full display on Tuesday night.

As the Lions gear up for their second season with Dan Campbell as the head coach, HBO has infiltrated the facility for its annual training camp show ‘Hard Knocks.’ Not only did the first episode (which was one of the best ever) provide an all-time soundbite from Campbell, it also gave us a look at Hutchinson’s best Michael Jackson impression.

During Detroit’s rookie talent show, Hutchinson stood in front of his team and belted out the King of Pop’s smash hit ‘Billie Jean.’ After a few moments of laughter and initial shock, the rest of his team got behind their first round pick and hyped up his performance.

Although the talent show moment was hilarious, it was actually a lesser-noticed moment that was the highlight. As the Lions players got into Hutchinson’s performance, one of them in the second row threw his shirt into the air.

The shirt just so happened to land in the front row, where a teammate caught it with one hand and without looking before seamlessly waving the shirt around his head like a helicopter. It was electric.

Why is no one talking about the best part of this Aidan Hutchinson singing clip? Dude in the 2nd row rips his shirt off, throws it to the front row and the dude in the yellow no look catches it and immediately starts waving it. Most electric moment of the episode. pic.twitter.com/sqAzxxEwkc

While Hutchinson was undeniably the star of the show, his singing and dancing overshadowed one of the