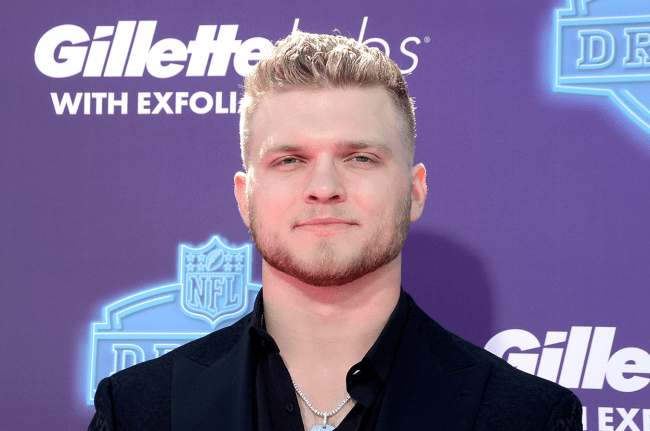 After a historic year for Michigan football, defensive end Aidan Hutchinson was all-but guaranteed to hear his name called in the first five picks of the NFL Draft. As a result, he was one of a handful of players to be invited to the green room.

By receiving the invitation, Hutchinson was in attendance in Las Vegas and got to get off his best fit. Dressed in all black from head to toe, the 6-foot-6, 265-pounder looked like he was ready to hit the tables at the Bellagio, grab a nice dinner at Joel Robuchon, and celebrate the night away at the Omnia.

While it didn’t look like there was anything particularly intricate or extravagant about his outfit, that was not the case. Everything he wore was not only incredibly dapper, but it all had a hidden meaning.

Around his neck, Hutchinson wore an iced out dog tag. It was a way of commemorating his great grandfather, who served in World War II.

In addition, on the inside of his jacket, his mom did something pretty special.

Hutchinson is someone who believes strongly in manifestation and has always written his dreams and goals in a journal. On the inside of his suit coat, all of those manifestations from the last five years were written in the lining.

The entire thing, though subtle and hidden, is incredibly wholesome and very cool. Take a look:

.@aidanhutch97’s mom put all his journal manifestations from the last five years on the inside of his suit. 🥺
⁰📺: 2022 #NFLDraft — Tonight at 8pm ET on NFLN/ESPN/ABC pic.twitter.com/HmjjOwCQef