4* WR Recruit Takes His Commitment Ceremony To The Next Level With Live Florida Gators, Literally 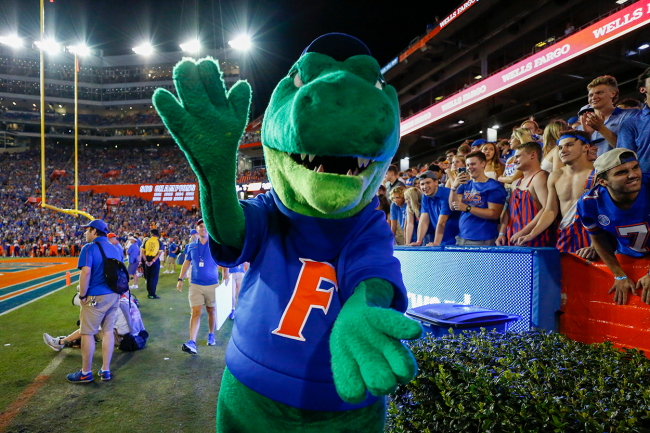 The University of Florida continued its impressive run on the recruiting front on Friday. Orlando-native Aidan Mizell committed to the Gators and took his announcement very literally.

Mizell, a four-star receiver in the Class of 2023, is the No. 13-ranked player at his position and has offers from 39 D-I programs, including Alabama, Georgia, Tennessee, Arkansas, Baylor, Louisville, Indiana, Michigan and Oklahoma, among others.

Mizell is one of the fastest players in the country. He is the son of a former All-American sprinter and has run as fast as 10.65 in the 100-meter dash and 46.99 in the 400-meter dash. He will likely run for Florida during the football offseason with those times.

Although he was long considered a UF-lean, Mizell made his commitment official in front of friends and family on Friday. And he did so in style.

Mizell was down to a final three of Florida, Alabama and Tennessee. To announce his decision, Mizell emerged from behind a backdrop set up in his high school gym.

It was was immediately clear which school he chose, not only because Mizell was wearing a Gators hat and t-shirt, but because he was holding live alligators. No, seriously.

There have been a lot of crazy commitments over the years, but Mizell’s has to be near the top.

Florida got a good player on Friday and his announcement couldn’t have been more unique.