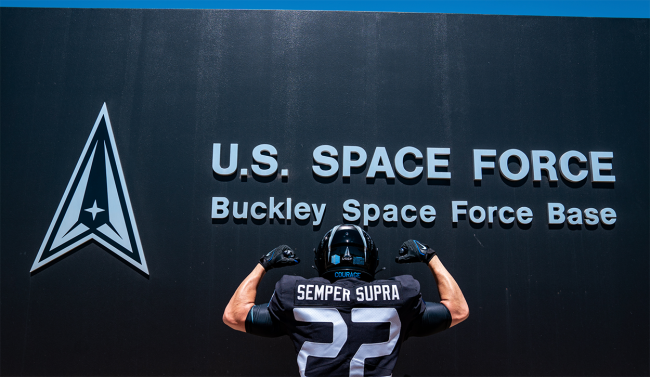 When Air Force football takes the field against Navy on the first Saturday in October, it will no longer be the Air Force, it will be the Space Force. Kind of.

The Falcons announced on Thursday that they will be wearing new uniforms and they look awesome.

The team got to see them first and their reaction says it all.

POV: you're seeing our new uni for the first time 👀 pic.twitter.com/G9AFQ9TUSG

Air Force’s Space Force uniforms are all black from head to toe with some very intricate details.

A lightning bolt is shared by both the U.S. Air Force and U.S. Space Force, representing dominance, quick strike and precision. It will be featured on the helmet on top of a base gradient that represents coming into the light.

The uniforms will also fuse together the official mark of the Air Force Academy with the Polaris star and orbit, showing a connection between the Air Force and Space Force. It will also appear on the right pant hip.

Also on the all-black pants will be a pair of blue vertical strikes with USSF in grey down the middle. Here is another look at the uniforms and all of the unique, finite details:

Nike, the Air Force Academy, and the Space Force absolutely knocked these out of the park. The uniforms are different from anything else out there, and they took all of the little things into consideration. They are awesome.