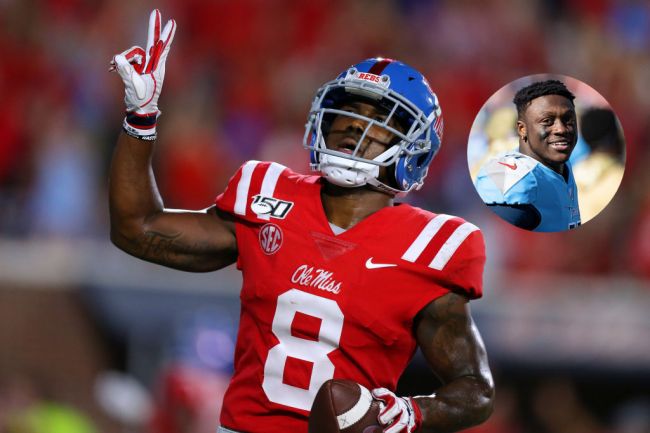 When the New York Jets drafted Zach Wilson with the second overall pick in the draft on Thursday night, my primary emotion was one of sorrow. It’s not that I have anything against Wilson, I just feel immensely bad that his career ended before it began, which is what being drafted by the Jets can do to a young football player.

All that said, though, I have been surprised by how much I’ve enjoyed the Jets moves so far, as they traded up to select USC offensive lineman Alijah Vera-Tucker in the middle of the first round before selecting Ole Miss wide receiver Elijah Moore in the top of the second round.

Here at BroBible, we actually have a resident Ole Miss expert — co-worker Grayson, who’s a proud alumnus of the University of Mississipi. As soon as the Jets selected Moore, I shot G a Slack message to find out how excited I should be about Moore. And while Grayson undoubtedly brought the knowledge — “Dude is TWITCHY, great inside, genuinely should’ve won the Biletnikoff Award last year” — it turns out that I should’ve just checked in with Titans wide receiver A.J. Brown, Moore’s former teammate at Ole Miss.

In yet another awesome NFL Draft moment, the Titans star was filmed reacting to Moore being drafted by the Jets and can be seen being overcome by emotion as he describes his appreciation for both Moore and his talent.

Wow this is POWERFUL stuff. #Titans A.J. Brown gets extremely emotional when former Ole Miss teammate Elijah Moore gets drafted by the #Jets

That’s genuinely powerful from Brown right there, man. That’s the type of brotherhood that can only be forged in the fire of hours upon hours of weight training and practice, in the locker room and on the field.