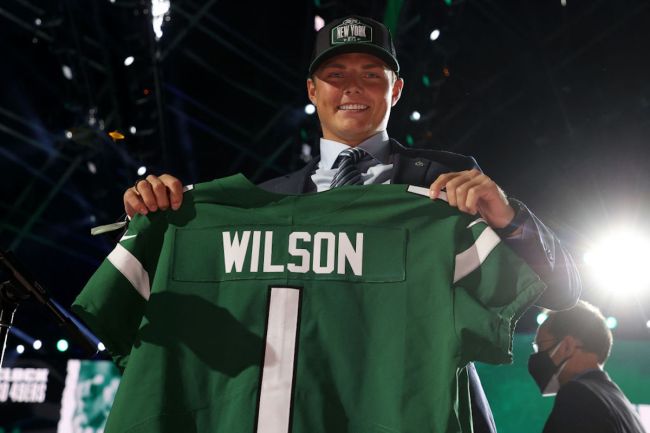 Before one of you hyper-serious douchebags tries to dunk on me with some bullshit like “Why would a measly blogger feel sorry for a multi-millionaire NFL star?”, allow me to say… you’re absolutely right. Zach Wilson, at just 21-years-old, has already accomplished more than me in life. He’s about to sign a $35.2 million contract and his girlfriend is a 10/10, two things I very much don’t have right now. I get it. Didn’t see that one coming, did ya? I just 8 Mile‘d your ass.

When I say I feel sorry for Zach Wilson, it’s solely in reference to the kiss-of-death that is being drafted by the New York Jets, a poorly run waste management company masquerading as a football franchise. I feel sorry for him in a caring way, almost as if I wish I could protect him from the oncoming and unstoppable derailment of his career.

I’m 28-years-old now — cue Jamie Lee Curtis screaming “I’m like the crypt keeper!” in Freaky Friday — which means I’ve been watching the Jets trip over themselves for two decades now. From Vinny Testaverde to Chad Pennington. From Brett Favre (Did you even remember he played for the Jets?!) to Mark Sanchez and the recently liberated Sam Darnold (miss you already, man) — I’ve seen it all, and unfortunately for Wilson, no matter how different the details may be, the ending of the story always remains the same: inevitable disaster.

Let me contextualize just how poorly run the New York Jets are: I consider the New York Mets, the fucking Mets, to be a consummately better-run organization. Honestly, think about that for a second. Take a beat to truly consider that: the Mets, a team synonymous with self-inflicted fuckery, elicits more respect and trust than the Jets do. That’s absolutely fucking dire.

Maybe I’m wrong. I certainly hope so. Maybe this kid out of BYU will prove to be the franchise-saving quarterback that the Jets thought they drafted half a dozen times in my life. Maybe he’ll turn out to be the Patrick Mahomes/Aaron Rodgers-type player that some experts say he can be. But until then, based on everything I’ve seen the Jets during my life, I just can’t help but feel sorry for the kid. I’m a Jets fan and I wouldn’t wish them on my own worst enemy, let alone Zach Wilson. I’ll be rootin’ for your success though, kid, whether that success is becoming the Jets’ franchise QB, or getting the hell out of there as fast as you can. God speed, and remember: Just End The Season.

I'm no draft expert but I feel like Zach Wilson's stock should be plummeting with all these stupid pics he's posted today pic.twitter.com/766sdsGYK8

Zach Wilson is gonna have a nice WR core though 👀 pic.twitter.com/MzNihiHKpv

Zach Wilson looks like he threatens litigation after getting sacked

Zach Wilson realizing he actually has to play for the Jets pic.twitter.com/lMkFGnRglg