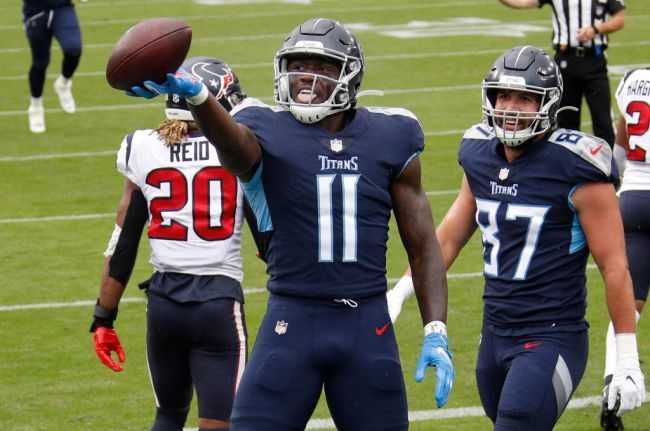 Julio Jones wants out of Atlanta, and all signs point to the Falcons dealing him sooner rather than later. With the writing on the wall, players from around the league have taken matters into their own hands in trying to recruit the 32-year-old wideout to their squad, and Titans’ wide receiver A.J. Brown is the latest to make a pitch to Jones.

Back in late April when the Jones rumors were really starting to pick up, Brown tweeted that he would give up his No. 11 for a chance to play alongside his idol. Brown has now changed up his tactics and slid into Jones’ Instagram DM’s by sending him a voice message.

While Brown explains in his message that he does want Jones to join him in Nashville, he hilariously backtracked on his statement about giving up No. 11.

“You know I got your back, trust me, if you want to carry the load, you can carry it, but if you get tired, you know I can carry you bro.” Brown said in part of his message. “And another thing, you know I’m not giving my number up, I said I would, I tried to get No. 1, but they said I can’t, you’re gonna have to rock No. 8.”

Titans’ running back Derrick Henry has also been trying to convince Jones to come to Tennessee. He tweeted ‘Titan TF Up’ in response to a tweet asking what team in the league would be most dangerous with Jones.

The Titan’s offense would be pretty special with Jones added to the fold. With Ryan Tannehill under center, Henry toating the rock, and the 1-2 combo of Jones and Brown could be absolutely lethal.

Jones is still under contract and the Falcons aren’t just going to deal him for scraps, so whichever team does acquire him is likely going to have to give up quite a few pieces to do so.