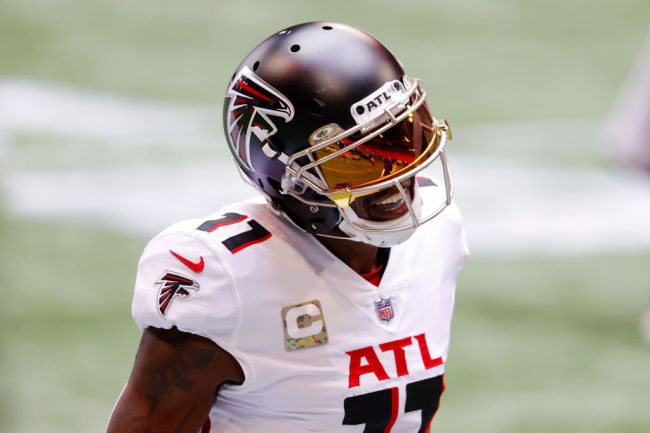 Shannon Sharpe may have done Julio Jones a little bit dirty on Monday, but it got us the answer we’ve all been looking for. The NFL Hall of Fame tight end and current host of Undisputed on Fox Sports was in the middle of a discussion surrounding Jones’ future in Atlanta. Specifically, he and Skip Bayless were talking about a recent photo of the Falcons’ wide receiver wearing a Cowboys shirt.

Sharpe decided to put any speculation to rest. Live, on-air, he cold-called Jones and asked him point-blank if he wants to go and play in Texas. Sharpe did not give Jones any warning that he was on speaker phone in front of a national audience. California is a two-party recording state, so what went down might have been illegal.

It is unclear whether Jones knew he was talking to more than his “favorite uncle,” as Sharpe puts it. It may not have been the best way to approach things, but what’s said is said and the moment made for a wild segment of TV.

Shannon Sharpe just cold called Julio Jones and asked him if he was going to Dallas.

This needs to be apart of every day content. pic.twitter.com/0ZA6dve6xn

Sharpe asked, “do you want to go to the Cowboys? Or do you want to stay in Atlanta?” Jones replied, “Nah, I’m outta there man,” referring to the Big Peach.

Bayless, who seemed little bit on-edge with the situation, lost his mind and appeared as surprised about the candid response as the rest of us.

Sharpe decided to keep rolling and asked where Jones wants to go. Jones dialed it back a little bit saying that he wants to win, to which Sharpe joked that Dallas isn’t the place to win. Jones said he already knows.

Here’s the end of the clip. pic.twitter.com/MBvPqQnCoO

Jenny Taft, who is not on the screen, then interjected to try and remind Jones that he’s on television. The conversation continued for a moment and before Sharpe hung up, he slipped it in that they’re on-air. At that point, if he didn’t know before, it was too late.

Nonetheless, Jones, knowing then that he was being recorded, shut down any Dallas rumors.

Here is the whole call, from start to finish:

This is huge: Shannon Sharpe called Julio Jones live on @undisputed: Julio said he's "out of there" when asked if he wants to stay in Atlanta. He also said he doesn't want to go to the Cowboys. "I want to win."

Holy cow. I don't think he knew he was live. pic.twitter.com/5D8cXjclQt

Sharpe’s phone call with the seven-time Pro Bowl wide receiver made for great television. While it wasn’t the best way to approach the on-air reminder, Jones didn’t seem to mind and broke a pretty big piece of news live on Fox. We already could have guessed that Jones was planning to leave the Falcons, especially when the team didn’t include him in its schedule, but now we know for sure.

Julio Jones will not wear an Atlanta Falcons jersey or a Dallas Cowboys jersey next season. Thanks Shannon Sharpe!