Titans WR A.J. Brown Brags About Balling Out Despite Docs Telling Him In Week 2 That His Season Was Over 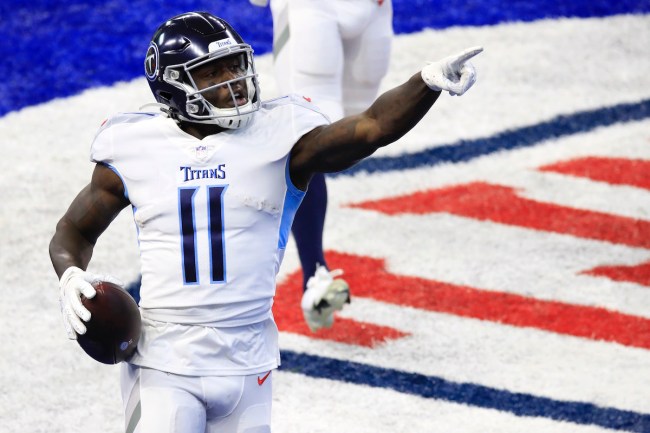 After a rookie season that saw A.J. Brown snag 52 catches for 1,051 yards and 8 touchdowns, the Tennessee Titans had high hopes for their 2019 second-round pick. But when the bullish receiver went down with a knee injury during a Week 2 game versus the Jaguars earlier this NFL season, there were concerns Brown may be done for a significant amount of time.

In fact, according to the wideout on Instagram Live Tuesday afternoon, Titans team doctors even said his season should have ended after the Week 2 injury. Despite that all, A.J. Brown just went about his business, not only continuing to play, but balling the hell out all year long, putting up insane numbers for a guy with a bum leg: 70 catches, 1,075 yards, 11 touchdowns.

Oh, and you better believe Brown was happy to brag about manning up and playing through the injury. Just look at what he posted while in the hospital bed following surgery on the bad knee.

Titans WR A.J. Brown just had surgery on both of his knees after playing all but two games and making the Pro Bowl.

OK, so saying something like this probably wasn’t the smartest decision by A.J. Brown, but, sheesh, if I were able to play at a Pro Bowl level on just one good knee I would’ve done the same thing — and I’m sure the meds he was on sort of helped encourage the idea in his mind. Sure, team doctors are smart and all, but… well, Brown didn’t, and he was able to have himself a damn year!

People on Twitter couldn’t quite believe it when hearing the news from the wideout, so take a look below at a few of the reactions from social media folks.

boy off them big percs

I woke up this morning with some slight pain in my right knee and thought to myself, ‘you know, you’re 36 years old now, Nick, you might want to avoid running or biking today just to be safe.’ Man, I’m a serious wuss! A.J. Brown would’ve stretched it out and blown by defenders all NFL season long — which, you know, he did… just on a more serious injury.

Props to Brown for winning the “Tough Guy of the Year” award this NFL season, because this is pretty wild. But, remember, listening to doctors is the suggested route, fellas, because not everyone can be superhuman like the Titans wideout seems to be.