Former Ole Miss WR A.J. Brown Claims A Big Ol’ Bag Full Of Cash Was On His Doorstep The Night Before Signing Day 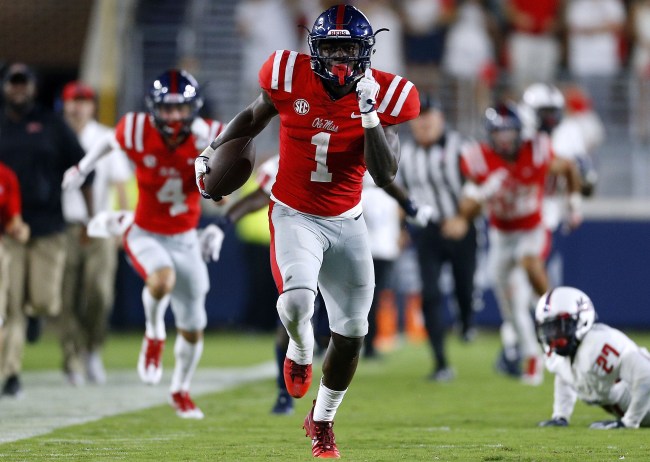 After being taken in the second round by the Tennessee Titans in the 2019 NFL Draft, wide receiver A.J. Brown went out and had a pretty damn good rookie season. Racking up 100 yards receiving in his first ever NFL game, the talented wideout from Ole Miss went on to post a total of five 100-yard games, finishing his first campaign with a solid 52 catches for 1,051 yards and 8 touchdowns. That type of ability has even led some to think bigger things are on the horizon in Brown’s second season, with whispers of becoming a breakout fantasy football player being heard.

While plenty of people are excited about A.J. Brown’s potential in the present and future, the wideout found himself telling a pretty interesting story about his past on the most recent episode of the Bussin’ With The Boys podcast. The show, which is hosted by Brown’s former and current Titans’ teammates, Will Compton and Taylor Lewan, dived into Brown’s college recruitment back in 2015 — which, as mentioned above, ended with the speedy wide receiver signing with Ole Miss.

As a former four-star recruit, Brown told a pretty wild story about one last ditch effort that an unnamed college football program made in order to try and snatch him up the night before National Signing Day. Rather than a late-night phone call or some other over-the-top way to recruit him, A.J. said that he found a bag full of cash on his doorstep as a way to try and change his mind from Ole Miss. Here’s how he told the story to the Bussin’ With The Boys guys.

“Night before signing day, I got a knock on the door, bag full of money in the front. Swear to god. They tried to just leave it and we was like ‘nah, we good bro. Come get this.'”

Man, all is fear in love and college football recruiting, huh? It’s too bad A.J. Brown didn’t give more detail about how much money was in the bag; or, more importantly, who it came from and if he kept the loot. Considering the Ole Miss football program fell under fire in the past after then head coach Hugh Freeze (nonsensically) tweeted for people to report violations to the Athletics Department — which ultimately led to a bunch coming in, the NCAA looking into them, and Freeze losing his job over some shit — one can’t help but wonder if the money came from a booster at Ole Miss? Of course, that’s just a theory, because it could’ve come from anyone.

As for A.J. Brown, the dude grew up in Starkville, Miss. (home of Ole Miss’ biggest rival, the Mississippi State Bulldogs), so, just maybe, somebody from that nearby campus made the quick drive over to his house to try and lure the then talented teenager to play for the Maroon and White instead of the Rebels’ Cardinal Red and Navy Blue. Unfortunately, we’ll probably never get the answer.

Unlike a recent story told by Tim Tebow about how he nearly changed his mind from Florida to Alabama just seconds before publicly making his announcement, it seems like A.J. Browns wasn’t going to let anything make him flip flop from Ole Miss to anywhere else to play college football — even if it was lots and lots of money.